Peace or prosperity in East Asia: Which came first? 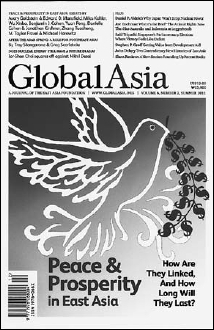 The year 1979 ought to be studied one day as perhaps the pivotal point in East Asia’s history. In South Korea it is remembered as the year in which the dictator Park Chung-hee was assassinated, ending his 18-year rule and heralding the tumultuous ‘80s, in which the people fought the government for greater liberties.

Also in 1979, the last major conflict between nations in this sphere, the one-month Sino-Vietnamese War, broke out and ended tens of thousands of lives on both sides. This was also the year in which Deng Xiaoping launched the economic reforms that may one day make China the largest economy on earth. Avery Goldstein and Edward D. Mansfield introduce these events in “When Fighting Ends,” the first essay of GlobalAsia’s summer issue, as a way of introducing its theme.

Of the 18 contributions published in this issue, nine center around “Peace & Prosperity in East Asia,” and the question of which comes first. Did prosperity result because the countries in the region were no longer at war, or did a newfound emphasis on growth result in fewer conflicts? That China has not been involved in a large-scale conflict since reforming its economy may point to the answer.

Articles with another theme ― like the future of nuclear power in Japan and the role of East Asian nations can play in helping Middle Eastern nations following the Arab Spring ― are meaningful because these nations have become prosperous. Its lost decades aside, Japan is still the third-largest economy in the world, and how it chooses to meet its energy needs post-Fukushima may have a profound effect on its neighbors.

Highlights of this issue include:

―“Myth-Telling: The Cult of Energy Insecurity and China-U.S. Relations” by Danielle Cohen and Jonathan Kirshner, which spells out how the two great economic powers can avoid seemingly inevitable conflicts over energy.

― Jor-Shan Choi’s pro-nuclear power piece, which argues that both the economic and environmental costs of abandoning nuclear energy are too great.