Yo-ho-ho and a bottle of Disney

Now, in “The Captain Jack Sparrow Handbook” Jason Heller brings you a guide to all things (Disney) pirate.

Piracy has been with us from the beginning of time. Julius Caesar was taken prisoner, ransomed and later crucified his capturers. The infamous Blackbeard looted ships in the eighteenth century. There was little attractive about pirates. 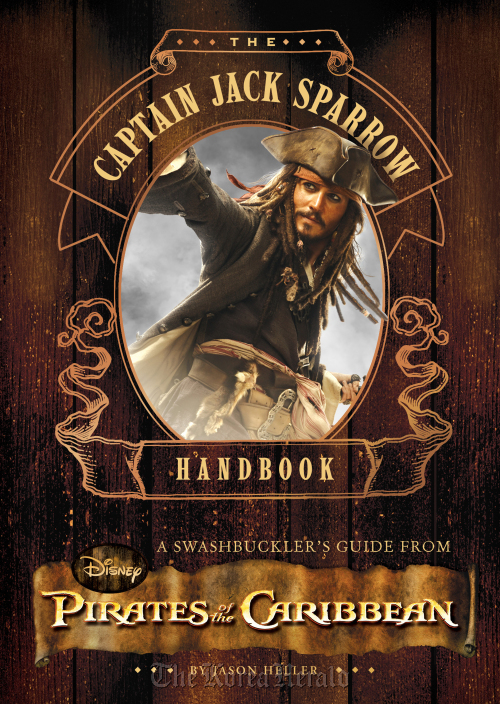 However, don’t let historical fact get in the way of the “Handbook.”

Written in a breezy fashion, the “Handbook” is thoroughly based in the world of Disney pirates. For example: “The legendary Elizabeth Swann became one of the greatest pirates in history. Pirates may be a loutish lot, but talent is talent, regardless of the package in which it is wrapped.”

Elizabeth Swann was a character in “Pirates of the Caribbean,” not a real female pirate like Anne Bonney or Mary Read.

The “Handbook” does have touches of realism: “A pirate’s life isn’t always so exotic. Some days you’ll be seizing a plump, loot-laden galleon; other days you’ll be preempting an invasion by some uniformed do-gooders” such as the English captain who finally cornered the historical pirate Blackbeard and came away with his decapitated head swinging from his bowsprint. (See page 53 for a ship diagram including a bowsprint.)”

It’s loaded with helpful hints such as don’t stand behind a loaded cannon when it fires unless you want “to get yourself a peg leg. Or two.”

Learn to swim. “As undignified as it may seem, taking swimming lessons at a local recreation center or YMCA is an ideal way to sharpen your strokes in a safe, controlled environment free of sharks, cannonballs and sea monsters.”

As to authentic pirate stench: “Suffice it to say that pirates are a fragrant lot.” And not in the rosewater-and-cream sense.

Want to broaden the next generation’s vocabulary? In the “Handbook” you have a pirate lesson including “Bilge Rat,” “Scalawag” and of course, “Feculent Maggot” ― “Feculent means ‘scummy’ in the particular sense of ‘soiled by biological waste material,’ and a maggot is, well, a maggot.”

One of the more interesting chapters, with illustrations, is about the many different forms of the Jolly Roger flag. The common skull-and-crossbones was only one version.

Pragmatically, this romantic view of piracy has nothing to do with the modern-day piracy around the world.