Another reactor was rocked by an explosion Tuesday at the Fukushima Daiichi Nuclear Power Station, 240 kilometers north of Tokyo. Japanese officials cautioned the residents to stay indoors to avoid radiation sickness.

According to its national energy plan confirmed in August 2008, the Korean government aims to supply 41 percent of the country’s energy requirements with nuclear power by 2030 from the current 23.3 percent. 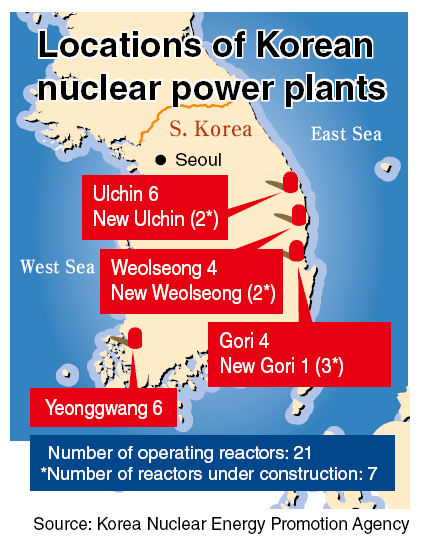 Korea has a total of 21 commercial facilities in operation and is building seven more.

However, opposition from the residents near atomic facilities and even in the candidate cities is getting fiercer amid a widening nuclear power crisis in Japan.

Along with environmentalists and civic groups, they plan to hold a meeting Wednesday to discuss follow-up plans.

“The Japanese government is not providing enough information on radiation leaks while the Korean government is repeating that Korea is safe,” said a civic group member.

“This accident broke the myth about the safety of nuclear power,” he said, demanding the withdrawal of all pending construction plans.

Opposition lawmakers also called for a stronger government surveillance system and reinforcement for buildings to endure a 9.0-magnitude earthquake, the size of the tremor that devastated Japan on Friday.

“We should stop building more nuclear plants. Our facilities are designed less earthquake-resistant than those in Japan,” said Rep. Lee Chung-hee, chairwoman of the Democratic Labor Party.

“Now when the international community is having second thoughts about nuclear power plants, we should reconsider our planned constructions.”

However, the government and the ruling Grand National Party downplayed fears about Korean nuclear power plants.

In a report submitted to the National Assembly on Monday, the Ministry of Education, Science and Technology said that Korean nuclear plants are designed to remain intact when directly hit by an earthquake of up to 6.5 on the Richter scale.

“We are designating the construction sites considering the activity of earthquake and fault structure within 320 kilometers,” the report said.

Finance Minister Yoon Jeung-hyun also said: “I was recently briefed that Korean facilities, including the Gori plant in Busan, had been constructed more than 20 years later than those in Japan and they are more than 100 times safer.”

Another important difference between Korean facilities and the Fukushima plant is the structure of their reactors.

Unlike the “boiling water reactor” of the Fukushima nuclear plant, which was built in 1971, most Korean facilities have adopted “pressurized water reactor,” which has three separate cooling systems, which reduces the risk of accidents.

The government’s explanations do not seem to have relieved public anxiety as Japan, which is still considered to be best-prepared for earthquakes and to have the world’s most advanced nuclear power technology, is struggling to prevent a meltdown at a quake hit plant.

President Lee Myung-bak observed the regular civil defense training at the Central Disaster and Safety Countermeasures Headquarters in the government complex Tuesday upon his arrival from a three-day visit to the United Arab Emirates.

“We should tighten emergency drills in case of a nuclear crisis. Even though there is no need to be anxious, training should be carried out in our daily lives,” Lee said in a videophone conversation with Lee Yong-tae, director general of the Weolseong Nuclear Power Generation plant in Gyeongju, North Gyeongsang Province.

The government will start a large-scale inspection on the earthquake resistance of nuclear power plants and other fuel facilities nationwide. The investigation aims, among other things, to look into whether protection for all 21 atomic facilities that are supposed to endure a 7.5-magnitude earthquake works properly.

It will be the first time for such an inspection to be staged by a pan-governmental task force.