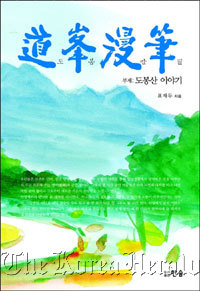 He finds the mountain fascinatingly beautiful and therapeutic, offering opportunities for its visitors to connect with nature.

Pyo’s newly released book, “Story of Dobong Mountain” consists of seven chapters of essays on it and his love for mountain climbing.

Chapter one talks about the beauty of Dobong as well as the joy of climbing it, while chapter two introduces poems written by scholars of Korea’s Joseon Dynasty (1392–1897), that depicted and praised the beauty of Korean mountains. One of the featured scholars is Kim Si-seup, a prolific author of Joseon who wrote the first novel in Korean in Classical Chinese, titled “Geumosinhwa.”

Pyo continues to write about the history of Korean mountains from chapter four to six. In chapter seven, the last chapter, he shares his own philosophy on what it means to climb a mountain in these busy, modern times.

The book is personal, historical and even spiritual, offering a fine account of Dobong Mountain as well as the human connection with nature.

Madame Tussaud: A Novel of the French Revolution
By Michelle Moran
(Crown, $25) 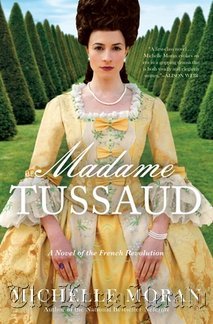 Writing historical novels can be tricky. Michelle Moran expertly balances fact and fiction in her latest novel, “Madame Tussaud,” about a woman whose wax modeling told the tale of the French Revolution.

Moran tells the true story of Marie Grosholtz, later known as Madame Tussaud (namesake of the wax museum), who was Paris’ premier wax modeler when the revolution began in 1789. She worked tirelessly at her family’s home business, where she displayed models of the royal family in different aspects of their lives.

In the months leading up to the revolution, Marie entertained King Louis XVI and the queen (Marie Antoinette). The Grosholtz family’s “Salon de Cire” displayed life-size re-enactments of the royal family that were so famous, the king and queen had to see for themselves.

Slowly, Marie began to notice the working class questioning the monarchy, and it became clear it was no longer safe to depict the royal family in a favorable light. Her family’s salon was in a unique position because she was essentially delivering the news with her exhibitions.

Each day, she made sure to be in the middle of what was going on so she could go home and recreate it for her patrons. She showed famous scenes such as Thomas Jefferson and the Marquis de Lafayette contemplating the revolution in Jefferson’s study and the Marquis de Sade in his jail cell in the Bastille Saint-Antoine.

When she is asked to model the heads of those who have died for the cause, her internal struggle begins. How much success is worth this? When does being arrested become the more appealing option?

Moran eloquently recreates the thin line that Marie walked as she entertained the leaders of the revolution while also tutoring the king’s sister in the art of wax modeling.

The story of how she got the famous name, Madame Tussaud, is the smallest plot in the tale.

Moran has done the research, and she includes all the famous players in the French Revolution. Written from Marie’s point of view, the book gives readers an intimate and entertaining take on events during that time.

No one knows if Madame Tussaud was a patriot or a royalist, and Moran doesn’t stray too far either way. By the end, Marie’s opinion is clear, and it is Moran’s clever writing that sways the reader as well.