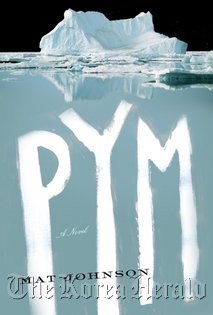 Recently fired American literature professor Chris Jaynes is obsessed with Poe’s only novel,“The Narrative of Arthur Gordon Pym of Nantucket.” It's a strange tale of shipwrecks, mutiny and a mysterious island inhabited by black-skinned people whose teeth are even black, and it ends abruptly at the South Pole with Pym facing haunting white figures.

When Jaynes discovers a manuscript of a memoir that seems to confirm Poe’s story and the location of the island, Tsalal, he sees it as the key to his redemption. To get back into a lecture hall, though, Jaynes must first go to Antarctica and find the current that carried Pym to Tsalal.

He assembles an all-black crew under the premise of converting centuries of frozen ice into the purest drinking water. Soon, though, they lose contact with the rest of the world. That's when the tall, white snow creatures emerge from the ice caves and make Jaynes and his crew their slaves. Luckily, the crew has a secret weapon: a stash of highly processed, sugary snack cakes.

A commentary on racial identity, obsessions and literature should not be as funny as “Pym,” but Johnson makes light work of his heavy themes. Johnson’s warped reframing of Poe's Pym narrative turns an obscure adventure story uncomfortably seeped in black-and-white imagery into an exploration of what horrifies Americans now. (AP)

Behind the Palace Doors: Five Centuries of Sex, Adventure, Vice, Treachery, and Folly From Royal Britain 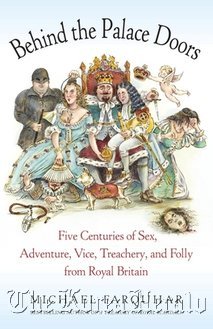 If there had been earnest scandal sheets published half a millennium ago, they would have chased the kind of stories about British royals that this book does: trivial, titillating, tendentious — and largely true.

Author Michael Farquhar is a writer and editor at The Washington Post who specializes in history. He has produced books about royal scandals, American scandals, liars, misleaders and forgotten Americans such as pirates and skinflints.

George VI, Britain’s World War II monarch, is an exception among a score of sinners, clowns and mediocrities in “Behind the Palace Doors: Five Centuries of Sex, Adventure, Vice, Treachery, and Folly From Royal Britain.” He won not only the battle against his youthful stutter, portrayed in the Oscar-winning film “The King‘s Speech,” but also a struggle that may have been tougher for a trained naval officer, a veteran of World War I: He decided to stay away from the D-Day landings in France.

“I don’t think I need emphasize,” he wrote Prime Minister Winston Churchill, “what it would mean to me personally, and to the whole Allied cause if at this juncture, a chance bomb, torpedo, or even a mine, should remove you from the scene.”

He did need to emphasize, asking Churchill in another letter: “... (I)s it fair that you should do exactly what I should have liked to do myself?” Churchill deferred, grumbling.

The book starts more than four centuries earlier with Henry VIII, in his youth an athlete as well as a scholar, linguist and musician. By his early 50s he was “so overgrown with corpulency and fatness,” say the chroniclers, he had to be hoisted onto his horse and up flights of stairs.

Farquhar sympathizes with the horse and with teenager Catherine Howard, the fifth of Henry‘s six consecutive queens. Henry had two of them beheaded, including Catherine. She’s not to be confused with Catherine of Aragon, his first wife. He divorced her, a Catholic, after more than 20 years of marriage. That was part of his successful effort to set up a new form of Christianity — Anglicanism — and to marry Anne Boleyn.

Anne was also the first of his wives that he sent to the ax-man.

Their daughter, who became Queen Elizabeth I, gets kinder treatment from the author. Though one of her biographers has 15 entries in his index under “Rumor and Scandals,” this book doesn‘t question the idea of the “Virgin Queen.” That nickname for Elizabeth was adapted for the first English colony in North America: Virginia.

Most of the kings of the 1600s, 1700s and 1800s get heralded by brief, sharp chapter headings: James I, who hated tobacco, witches and women in general — “Bewitched”; Charles I, beheaded by a Puritan revolt — “With Head Held High.”

Charles II, the “Merry Monarch” who restored the kingdom and the theater, gets a remark from the Duke of Buckingham, a gentleman of the bedchamber: “A king is supposed to be the father of his people, and Charles was certainly father to a good many of them.”

There are some surprises: Queen Victoria, often thought a model of prudery, describes her wedding night in her journal: “When day dawned (for we did not sleep much) and I beheld that beautiful angelic face by my side, it was more than I can express.”

Farquhar’s footnote adds: “It was actually (her bridegroom) Albert who was the prude.”