[Sylvester Eijffinger and Edin Mujagic] Qualifications for next ECB president

By 최남현
Published : Jan 19, 2011 - 18:15       Updated : Jan 19, 2011 - 18:15
TILBURG, the Netherlands ― Two years ago, the leaders of the world’s central banks were considered heroes for their efforts in preventing financial crisis from turning into Great Depression II. Today, however, central banks are being sharply criticized, and their independence is coming under severe pressure in many countries, particularly in the eurozone, as Mario Draghi, the head of the Bank of Italy, recently pointed out. 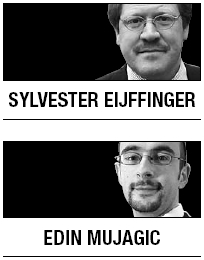 The type of person at the helm of any central bank is always important ― but now more than ever, because financial crises always threaten central banks’ independence.

In the United States, the Federal Reserve seems to have support only of the Obama administration, hardly something of which to be proud. Congress has disparaged the Fed’s handling of the crisis, and Representative Ron Paul of Texas, who believes that the Fed’s very existence is unconstitutional, will take over one of the key congressional oversight committees in January. More than half of all Americans want politicians to have more say over monetary policy ― a scary prospect in view of the historical record.

Given the likelihood of a long period of sub-par economic growth, increasing pressure on public finances in the eurozone, and the ongoing debate on the future of the euro, the European Central Bank has become, more than ever before, the last line of defense for Europe’s common currency. A firm ECB president, unwilling to yield to political pressure, is needed.

During the financial crisis, the ECB has had an outstanding president in the person of Jean-Claude Trichet. But his non-renewable term will end in October 2011, and European leaders are not waiting until the last moment to appoint his successor. Indeed, positioning and bargaining among the euro’s member countries has already started.

First and foremost, the next ECB president should excel on monetary matters. True, the current financial crisis has brought bank supervision to the fore. But monetary policy, not bank supervision, is the raison d’tre of central banks, whereas the banks can be well handled by the newly established European Systemic Risk Board, which is responsible for macro-prudential supervision in Europe from Jan. 1, 2011.

Furthermore, and contrary to common belief, the ECB president need not be very diplomatic, but should be able to unite all members of the ECB’s Governing Council. As political pressure on central banks, including the ECB, increases, its president must not hesitate to criticize European politicians and, if necessary, publicly name and shame them. The ECB’s independence is its most valuable asset ― indeed, it is indispensible. A good central banker must be able to say no to politicians.

This does not mean the ECB president should pick fights whenever possible. On the contrary, he should be able to build support for the ECB’s independence. But he should follow the maxim about politicians set down by the ECB’s first president, Wim Duisenberg: “I can hear them, but I do not listen.”

The president should also count on support from a majority of Europeans. Unfortunately, country of origin is highly important in this respect. Given the fact that the current ECB vice-president is from southern Europe (Portugal), the next head of the ECB must come from northern Europe. Only someone from Germany, the Netherlands, or a Scandinavian euro country like Finland can count on support from Germans, which is crucial.

There is certainly someone to be found in the eurozone who possesses all these qualities. In fact, there is more than one. Draghi is one. Others include Klaus Regling, head of the European Financial Stability Facility, Axel Weber, president of the Bundesbank, and Jrgen Stark, a current member of the ECB’s Executive Board.

Draghi’s Italian passport and his past service at Goldman Sachs do not help him much. Regling has a lot of experience, but none in central banking and monetary policy. Anyone who wants Stark will need a good team of lawyers to figure out how to convert his current, non-renewable appointment on the Executive Board into an appointment as president without violating the ECB’s rules. Given some of Weber’s statements over 2010, he could be accused of being much too undiplomatic.

Nout Wellink, currently the head of the Dutch central bank, is a wildcard candidate, as is Erkki Liikanen of the Finish central bank. Both are suitable for the post. The final decision, of course, rests with European heads of state and government. But, in our view, Trichet’s successor will most likely answer to the name of Weber, Wellink, or Liikanen.

By Sylvester Eijffinger and Edin Mujagic