On the other hand, households of four or more are mired in constant decline. Last year, they made up 18.8 percent, or 4 million households, but the portion is expected to be reduced almost in half to 10.1 percent by 2040.

“As of 2021, the number of single-person households in Korea came to 7.2 million, surpassing the 7 million mark for the first time and becoming nearly double the size of Korea’s traditional four-person households, which came to 4 million in the same year,” the report said.

The report, based on a survey of 2,000 one-person households nationwide, found that they set a retirement savings goal of 770 million won ($534,000) on average and were willing to hold down multiple jobs to achieve that goal. Last year, their expected retirement age was 63, up from 62 in 2020.

Some 42 percent of the respondents said they were working multiple jobs and half said they aimed to make extra money in spare time. Only 14.1 percent said they held extra jobs for living costs.

Respondents saved 44.1 percent of their income on average, while spending 44.2 percent. The remaining 11.7 percent was used to pay back debt. Two years ago, the average portion of spending reached 57.6 percent. 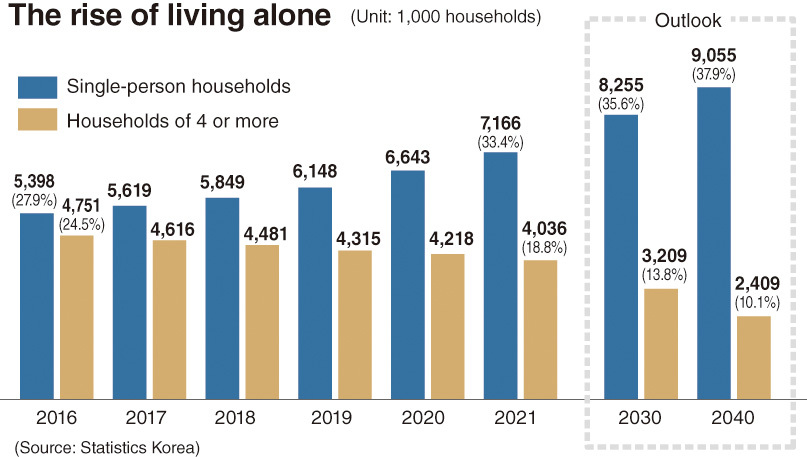 Apartments were the most popular choice of residence type among single-person households, with 36.2 percent of the respondents living in them, compared with 33 percent in 2020. Those living in single private houses or villas -- a building with fewer than four floors and with small, low-priced apartments -- came to 35.3 percent, declining from 39.6 percent in 2020.

“Defying the myth that one-person households spend more than they save with their ‘you only live once’ mindset, they have become smarter with managing their money by increasing their savings,” the report noted.

“They are aware of the importance of preparing for retirement and are seeking professional consulting to design related plans.”