[Benjamin Carter Hett] Putin and the desperation of tyrants 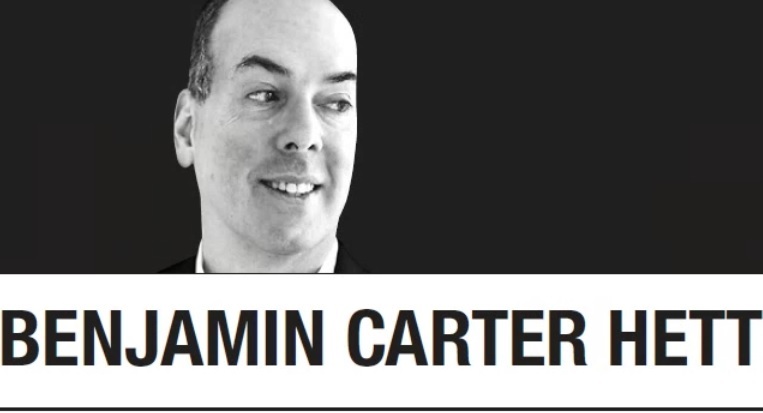 In recent days the world has watched with astonishment and admiration as the people of Ukraine have put up fierce -- and so far, successful -- resistance against Vladimir Putin’s brutal invasion of their country.

Putin has united the world against him like never before. Unexpectedly severe sanctions are starting to bite deeply into the Russian economy. Even thousands of brave Russians have taken to their own streets to protest the war.

It may be that Russia will still manage to win some sort of military victory in Ukraine. But even if it does, the future does not look good for Putin. Occupation of a defeated Ukraine will face the insurmountable obstacle of a mobilized and angry population. Russia’s growing isolation and economic hardships will spread discontent to powerful business and even military interests, who could threaten Putin’s hold on power.

All of this is good news for world democracy. But it also creates a very real danger. Over the weekend Putin ordered Russia’s nuclear forces to go on high alert and issued military threats against Finland and Sweden. In doing so he is following an old pattern: Dictators are always at their most dangerous not when they are winning, but when they fear they are about to lose.

The most fateful example is Adolf Hitler.

In the late summer and autumn of 1941 Hitler had a clear sense that world events were moving against him. Britain and the United States were drawing ever closer together, with America supplying Britain with weapons and other resources through the Lend-Lease program. President Franklin D. Roosevelt and Prime Minister Winston Churchill signed the “Atlantic Charter,” which became the founding document of the United Nations. In the Soviet Union, the German invasion, which had started in June, bogged down in the face of unexpectedly stiff Soviet resistance.

Hitler’s response was to step up persecution of European Jews. First, Jews in all of Nazi-controlled Europe were forbidden to immigrate to safety anywhere. Then a program of deportations began in which Jews were sent from Germany and other Central European locations to “ghettos” and camps in Poland and the occupied Soviet Union.

In late November 1941, Fritz Todt, who was in charge of German military contracting and construction, told Hitler bluntly, “this war can no longer be won militarily.” Hitler asked Todt how he should end the war. When Todt told him that there needed be a “political solution,” Hitler replied that he didn’t see how he could do that.

Two weeks later, in the wake of Pearl Harbor, Hitler significantly widened the war he had been told he could not win: He declared war on the United States before Roosevelt had made any effort to get Congress to declare war on Germany.

In early 1942, the Nazi regime began the comprehensive genocide in which Jews from all over Nazi Europe were sent to specialized camps to be murdered with poisonous gas. Hitler’s statements and actions through the fall and winter of 1941-42 make it clear that both the widening war and the genocide were his responses to an increasingly desperate situation.

Hitler’s example is the most devastating, but we see the same desperation in other dictators when they face the reality of failure. They become more brutal and repressive. Dictators are psychologically fragile: They need adulation and a sense of mastery, and they cannot tolerate loss. We have seen this pattern with Augusto Pinochet in Chile, Slobodan Milosevic in Serbia and Moammar Gadhafi in Libya. But another example may point even more directly to where we are right now.

In the autumn of 1989, the communist dictatorship of East Germany was crumbling in the face of economic crisis and increasingly large protest demonstrations. The strongman of that regime was not the head of the government, Erich Honecker, but Erich Mielke, the head of the infamous Stasi, the security forces.

As protests began to draw crowds in the tens of thousands, Mielke considered a “Chinese solution,” referring to the Tiananmen Square massacre of a few months before. Mielke’s memos and orders stressed that the security forces were in a desperate fight for their own lives, justifying the most violent response. Only the intervention of some prominent citizens (including the famous conductor Kurt Masur) and some in the Communist Party leadership kept Mielke from having his way and creating a bloodbath. Things could easily have gone differently.

Watching all this very carefully was a young Soviet KGB officer stationed in East Germany. People who know him say that this officer was profoundly shaped by the experience of seeing the East German regime fall without a fight, and that he would have done things very differently. The young KGB officer’s name? Vladimir Putin.