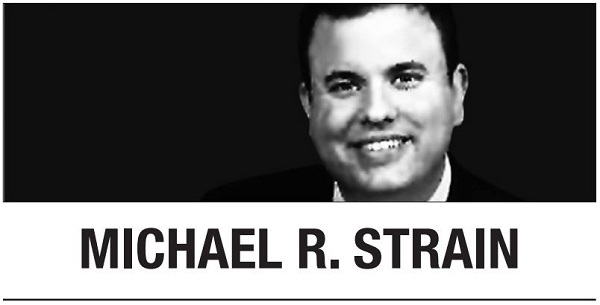 The marriage between big business and the Republican Party has long been one of the strongest in American politics. But that relationship is on the rocks, and the rift is growing wider and wider.

The conflict puts business leaders in the agonizing position of being caught between newly hostile Republicans and traditionally antagonistic Democrats. The correct response is not to commit to either party, but to find allies in both. Importantly, executives need to engage in a campaign of persuasion about the importance of free markets and of policy that creates a productive business climate.

The conflict between big business and the GOP has spilled into the open. The US Chamber of Commerce, the nation’s most powerful pro-business lobbying organization, has been a close and crucial Republican ally seemingly forever. So it came as a shock when the Chamber backed 23 freshman House Democrats in the 2020 elections.

In its pre-populist era, Republicans might have tried to mend fences. Not this time. House Republican Leader Kevin McCarthy’s response was to declare, “I don’t want the US Chamber’s endorsement because they have sold out.” Six months later, Sen. Tom Cotton, a potential 2024 presidential candidate, called the Chamber “a front service for woke corporations.”

Last month, House Republican leaders kicked the Chamber off their strategy calls about the Democrats’ climate and social-spending package, dubbed the Build Back Better bill, despite their shared opposition to the legislation. This self-destructive tantrum on the part of GOP leaders came after the Chamber criticized some House Republicans for not publicly supporting the bipartisan infrastructure bill that passed the House last Friday. “I didn’t even know the Chamber was around anymore,” McCarthy sneered.

The rift goes beyond the Chamber. Last March, employees at an Amazon factory in Bessemer, Alabama tried to unionize. Shockingly, Republican Sen. Marco Rubio of Florida backed the unionization effort.

In an op-ed explaining his decision, Rubio wrote that “companies like Amazon have been allies of the left in the culture war.” Rubio cited the need of workers to protect themselves: “Today it might be workplace conditions, but tomorrow it might be a requirement that the workers embrace management’s latest ‘woke’ human resources fad.”

The split appears to reflect the sentiment of rank-and-file Republicans, as well. Gallup conducted its annual “confidence in institutions” poll last summer. Only 20 percent of Republicans expressed a great deal of confidence in big business, a 12-percentage-point drop from one year earlier. Republican confidence in business is lower than it has been in the half-century history of the poll, according to Gallup.

There are many factors driving Republicans and business leaders apart. Here are three.

First, the GOP’s longstanding commitment to free enterprise has weakened. This began brewing during President Donald Trump’s time in office. Trump’s trade wars hurt many companies, and his willingness to use his soapbox and the power of his office to affect corporate behavior sent chills through the business community.

Of course, being pro-business is not the same as being in favor of free markets. It may be reasonable, for example, for pro-market conservatives to favor more vigorous antitrust enforcement to keep markets competitive even though incumbent, large businesses would be opposed. But Trump and his supporters don’t side with free markets ahead of big business -- instead, they often cast their lot with big government and industrial policy.

Second, the business community feels a sense of civic responsibility in the face of some of the most troubling aspects of today’s GOP. Trump’s shameful response to the 2017 white nationalist riot in Charlottesville, Virginia led Merck’s chief executive to resign from a White House business council. Charlottesville was a turning point for many corporate leaders.

Similarly, the fact that some GOP leaders are unwilling to clearly and forcefully acknowledge that President Joe Biden’s 2020 election victory was fairly won probably plays a similar role. If important segments of the GOP won’t back the result of a fair election, then the party is threatening the basic social stability that is a prerequisite for long-term prosperity and business success.

Finally, many businesses are adopting the aesthetics of the left’s cultural agenda, derided as “wokeism” by its critics. These businesses are trying to gain market share and to attract and retain customers and employees by revising their approaches to race, sex, climate change and other divisive topics. The effort is costing them support among Republicans.

In response, business leaders are hedging their bets and trying to make inroads with Democrats. The challenge facing them is that the Democratic Party remains even less friendly to its interests than the GOP, despite all the latter’s shortcomings.

Take those 23 House Democrats endorsed by the Chamber. Fifteen of them won re-election, and each voted in favor of the Protecting the Right to Organize Act, which the Chamber called a “wish list of union-sponsored priorities” that “harms employees, threatens job creation, and undermines our economic recovery.”

Likewise, under Biden, Democrats are pushing for higher taxes on corporations and entrepreneurs, and for increasing the regulatory burden on businesses.

These episodes show that the business community is wise to remain part of the broader Republican coalition, but to put some additional distance between itself and the GOP. It should continue to make inroads with Democrats, emboldened by the bipartisan infrastructure bill. The Chamber pushed hard for that bill among members of both parties, with success. And it needs to go back to basics, reminding elected officials and the public why its interests are aligned with the nation’s long-term prosperity.

Executives have no choice but to ride out the populist storm. For some time to come, like many others in this bizarre period, big business is becoming a community without a political party.


By Michael R. Strain
Michael R. Strain is a Bloomberg Opinion columnist. He is director of economic policy studies and Arthur F. Burns Scholar in Political Economy at the American Enterprise Institute. He is the author of “The American Dream Is Not Dead: (But Populism Could Kill It).” -- Ed.