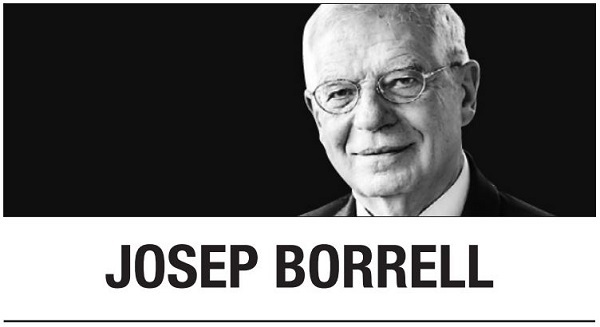 A compass helps one find one’s way, and the “Strategic Compass” that I have drafted at the behest of the European Council will serve as an operational guide for the European Union’s development and decision-making on security and defense. It is now heading to EU foreign affairs and defense ministers for discussions next week.

The compass is designed to answer three questions: Which challenges and threats do we face? How can we better pool our assets and manage them effectively? And what is the best way to project Europe’s influence as both a regional and global actor?

Our overall threat analysis shows clearly that Europe is in danger. The EU risks what I have called a “strategic shrinkage.” This can be perceived from three points of view. First, our economic reach is becoming increasingly circumscribed. Thirty years ago, the EU represented one-quarter of the world’s wealth; in 20 years, it will account for just over 10 percent. Our demographic shrinkage develops similarly: By the end of this century, Europe will account for less than 5 percent of the world’s population.

More fundamentally, some of our economic competitors hold values that are very different from ours, thus posing a threat to our normative power. The EU must integrate this fact into its policymaking, recognizing that the competition for global standards is already playing out in the race for mastery over artificial intelligence, cloud computing, semiconductors, and biotechnology.

Second, the EU’s strategic theater is increasingly contested, owing to challenges by new ambitious actors, demonstrations of military force, and destabilization strategies featuring cyber warfare and disinformation. Gone are the days when peace and war constituted two clearly distinct states. We are and will increasingly be confronted with hybrid situations that require a broad range of defensive assets.

Finally, the EU’s political sphere is being squeezed, and our liberal values increasingly contested. In the “battle of narratives,” the idea that universal values are really just Western constructs has been gaining traction. The old assumption that economic prosperity would always lead to democratic development has been refuted.

In navigating this increasingly competitive strategic environment, the EU must become a provider of security for its citizens, protecting our values and interests. But to do that, it will need to act faster and more decisively when managing crises. That means anticipating fast-changing threats and safeguarding its citizens against them; investing in the necessary capabilities and technologies; and cooperating with partners to achieve common goals.

Such measures will increase our capacity to deter attacks, and to react to one if it comes. The main value of military force is not that it allows us to solve problems, but that it can help to prevent problems being solved to our detriment. That is why the Strategic Compass proposes an EU capacity for rapid force deployment across the entire spectrum of actions envisaged by EU treaties.

Past attempts to deploy EU forces swiftly have met with only limited success. But the Strategic Compass aims to make such deployments more readily operational and effective in three ways. First, it would follow a modular approach, with its composition defined by concrete scenarios and reinforced by joint training, rather than being pre-positioned as a permanent force.

Second, there would be clear guidelines stating that it is the mission that determines the type and size of the force, not vice versa. And, third, we could step up our efforts to overcome various shortcomings that have long hampered our operational capabilities, with clear actions that should receive priority.

All of this will require both legitimacy and flexibility. Who decides, and how should decisions be implemented?

Without calling into question the principle of unanimity, it is possible to act creatively by activating certain provisions such as constructive abstention or Article 44, which allows for the creation of coalitions approved by the European Council. Above all, we need political will (without which nothing is possible) and operational efficiency (without which everything is pointless).

But the EU should of course not limit its actions to the deployment of military forces. The Strategic Compass also focuses on cyber, maritime, and space security. To anticipate threats, it proposes boosting intelligence capacities and expanding the suite of tools for countering hybrid and cyberattacks as well as foreign disinformation and interference. It also sets targets for investment to equip our armed forces with the necessary capabilities and innovative technologies, to fill strategic gaps, and to reduce technological and industrial dependencies.

Finally, let me emphasize that this effort in no way contradicts Europe’s commitment to NATO, which remains at the heart of our territorial defense. This commitment should not prevent us from developing our own capabilities and conducting independent operations in our neighborhood and beyond, especially at a time when US policymakers’ attention may be focused elsewhere (not least on the Indo-Pacific). European strategic responsibility is the best way to reinforce transatlantic solidarity. This concept is at the heart of the new dialogue on security and defense between the United States and the EU.

But all Europeans should understand that the Strategic Compass is not a magic wand. It is for the EU member states to determine whether today’s geopolitical shifts will be yet another unheeded wake-up call, and the renewed debate on European defense yet another false start. The Strategic Compass is an opportunity to meet Europe’s security responsibilities directly, in front of our citizens and the rest of the world.