Following the stock price jumps, the market valuations of Naver and Kakao stood at 63.57 trillion won and 63.26 trillion, respectively, becoming the third- and fourth-most-valuable stocks on the nation’s main board Kospi market.

Only six months ago, both Naver and Kakao were placed sixth and ninth, excluding a preferred stock, in terms of the size of market cap. Compared to their market values of 48.05 trillion won and 34.45 trillion won at the moment, their valuations jumped big by 32.3 percent and 83.6 percent, respectively as of Tuesday’s session’s close.

Dramatic increases in the platform giants’ market valuations have dragged down rankings of manufacturing companies and even bio firms. 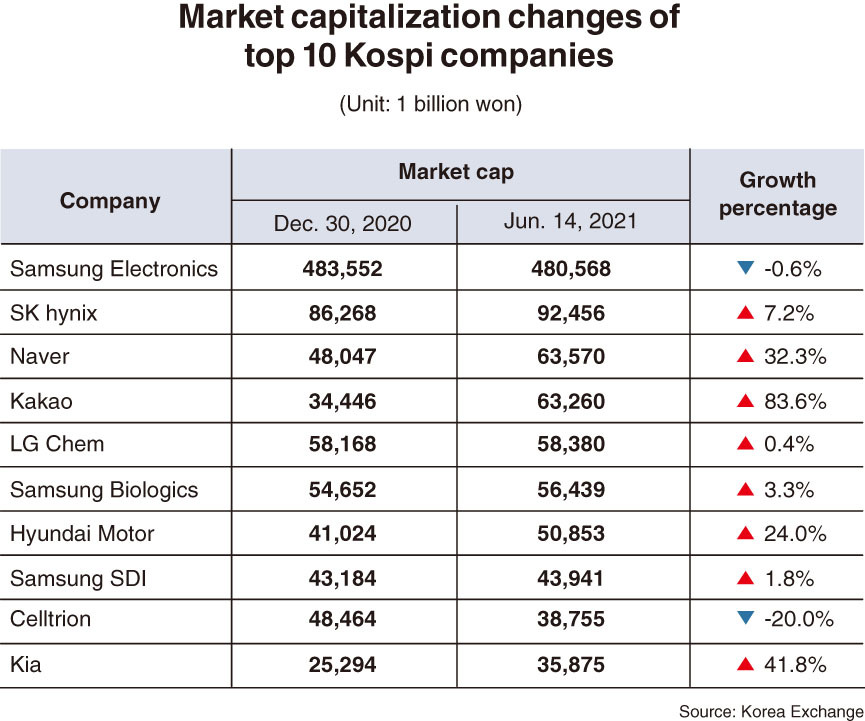 Overall, internet-related stocks have continued to thrive since last year with the emerging industry being considered a game-changer in the prolonged pandemic era.

“After the spread of COVID-19, top platform operators’ stocks have received strong premium globally. The valuation of the platform business is very amicable and extreme around the world thus far,” said Sung Jong-hwa, an analyst at eBest Investment & Securities.

“What’s behind share price rallies of Naver and Kakao was their successful expansion in businesses from ad-focused business portfolios to various platform businesses, including e-commerce, content and fintech.”

NH Investment & Securities analyst Ahn Jae-min further forecasts a rosy outlook for the internet giants. They will likely see an increase in market demand for their ad and commerce businesses as the economy gets back on a recovery track.

Meanwhile, Naver closed unchanged at 387,000 won per share on Tuesday. Kakao gained 1.4 percent to 144,500 won per share at the closing bell. It was the highest price per share since Kakao split its stock to 5-for-1 on April 15.