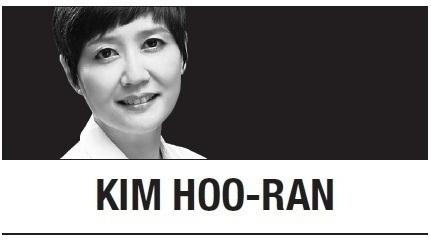 Watching “Minari,” a largely autobiographical film by Korean American director Lee Isaac Chung, I recalled a young family who one Sunday joined a church service of mostly Korean and Korean American college students in western Massachusetts in the late 1980s.

They were an immigrant family, like the Yi family in “Minari,” and the father worked as a chick sexer, like parents Jacob and Monica in the film. It was the first time I had heard of the job, which involves determining the sex of young chicks. The father explained that he was able to obtain his immigrant visa with the job as a chick sexer. He was excited about the family’s new life in the US.

Back home that summer, leafing through a Korean magazine, I happened upon a small box ad for courses on chick sexing. It claimed that chick sexing was the fastest way to emigrate to the US.

Actor Youn Yuh-jung’s Soon-ja, Monica’s mom who comes from Korea to take care of the children, was a personification of the many matriarchs of Korean immigrant families that I came to know.

These wise elderly women anchored the family. In a typically busy immigrant household where both parents worked day and night, often seven days a week, grandmothers took care of the day-to-day running of the household. Most of them did not speak English, but that did not stand in the way of taking care of the children and feeding the family.

In many ways, Soon-ja is an archetype of Korean grandmothers in the US. They were typically “invited” by their sons or daughters to the US sometime after they had settled into their life in the new country. While it would have been difficult to find three generations under the same roof in Korea in the 1990s, this was the norm among many Korean American families with young children.

The scene where Soon-ja unpacks her suitcase in front of Monica is a poignant one. Soon-ja has brought chili powder and dried anchovies, staples of Korean kitchens, and Monica sobs at the sight of these goods -- a reminder of the way of life she has left behind in pursuit of the American Dream -- and her mother’s comforting presence. Soon-ja does not need to say it, we know it viscerally: Mom is here and everything is going to be fine, don’t you worry.

And Soon-ja goes about doing her thing in the trailer home. Feeding the family the way only grandmothers know how and brewing herbal medicine for young David, who has a heart problem, Soon-ja makes herself useful. She encourages David to exercise, telling him he can do it. Ever the pragmatist, she takes a no-nonsense approach to life.

Soon-ja has brought minari seeds from Korea and scatters them at a creek near the Yi homestead with David in tow. She tells the young boy how minari is good for a whole host of things -- how tasty it is and how it can also be used as medicine.

Even after a stroke that makes it difficult for her to move about, Soon-ja insists on doing things around the house. Heaven forbid she should become a burden to her daughter and her family. It is her determination to be useful that brings about a tragic event.

But “Minari” is a film about resilience and hope, and the catastrophe brings the family back together just as it seems to be on the verge of breaking down. Watching the family sleep on the floor, lying close next to each other as Soon-ja looks on from a chair, we know that this family will pull through. Just like the hardy minari that thrives even in harsh conditions.

And we know that the elderly matriarch will hold the family together in the way that grandmothers with their unconditional love know well. David was right. Soon-ja is not like other grandmothers. She does not bake cookies. But she is much more.

Kim Hoo-ran is the culture desk editor at The Korea Herald.- Ed.