[Minky Worden] China is escalating human rights abuses in runup to 2022 Olympics. Will IOC look the other way? 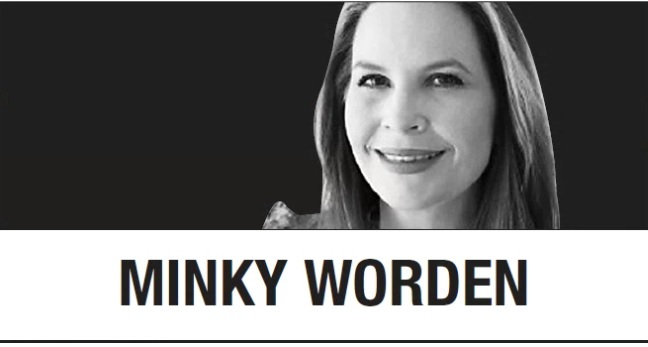 Last September, five international labor auditing firms declared they could no longer help companies audit their supply chains in China’s Xinjiang region because the Chinese government’s controls and repression made it too difficult to determine whether factories are using forced labor. The Better Cotton Initiative, a consortium to monitor sustainability -- affiliated with companies such as Adidas, Nike and Gap -- called Xinjiang an “untenable operating environment.”

This reality raises a critical question for the International Olympic Committee as it heads toward the 2022 Winter Olympics, set to begin in Beijing a year from now: How will it carry out human rights with due diligence as set out under United Nations standards? Without such scrutiny, Olympic leaders will be hard-pressed to ensure that forced labor was not used to make products in northwest China’s Xinjiang region bearing the IOC’s trademarked interlaced Olympic rings.

Performing a robust investigation into human rights abuses in China and how 2022 Olympic merchandise is being produced may be the IOC’s last best chance before the games to explain how it will confront the reputational risk from staging the Olympics there. The potential for damage is even worse than when the 2008 Beijing Olympics were used to “sportswash” China’s international image.

China’s documented mistreatment of Xinjiang’s 13 million ethnic minority Uighurs and other Turkic Muslims stands in stark contrast to the Olympic ideals of celebrating human achievement and dignity. Last week, a resolution was introduced in the US Senate calling on the IOC to take the 2022 Games away from China unless the country “addresses its egregious and numerous violations of human rights.” More than 180 human rights organizations have also called for a boycott of the games, and for the first time since the 1980s, European countries are considering pulling out of an Olympics.

Meanwhile, the Chinese government is cynically using the Olympics to rebuild its international image at a time of heightened repression at home and worsened relations with other governments abroad. To secure the right to host the 2008 Summer Games, the Chinese government made many promises to improve human rights. Those promises were broken, and worse, China used the Olympics as a catalyst for empowering its domestic security apparatus and expanding surveillance.

The Uighurs and other Turkic Muslim minorities in Xinjiang have long been subject to Chinese state repression. In 2014 -- a year before China was awarded the 2022 Winter Olympics -- Beijing began an escalating crackdown in the region, culminating in the incarceration of more than 1 million Turkic Muslims in “political education” camps and prisons. An unknown number of the children left behind are held in state-run orphanages and boarding schools and subject to political indoctrination. China imposes draconian controls on the movement of Turkic Muslims throughout Xinjiang, utilizing such means as house arrest, tech-enabled mass surveillance and a forced-labor program.

These are serious, systemic human rights violations of unprecedented scope and scale, even for China.

The IOC often says the Olympics are “a force for good,” but in the nearly six years since the Winter Olympics were awarded to China, Chinese officials have only escalated their abuses across the country. The Chinese government has dismantled nascent civil society groups, targeted labor rights activists, deepened repression of Xinjiang and Tibet and taken apart fundamental freedoms in Hong Kong.

Even though media freedom is a core requirement for Olympic hosts, Chinese authorities have tightened control over the domestic media and the internet. The government’s “Great Firewall” -- a massive system of online censorship -- along with state-controlled media within China, bars all meaningful criticism and news. China has increasingly made it difficult to connect to virtual private networks, which international reporters rely on to work, and Beijing has forced out many international journalists working for major media outlets.

There’s so much more the IOC could be doing if it truly wants to be a “force for good” in China. In 2017, Olympic leaders added human rights requirements aligned with the United Nations’ Guiding Principles on Business and Human Rights to its host city agreements. Although Beijing was awarded the Winter Olympics before the new human rights language was adopted, “operational requirements” included in the host city contract since then allow the IOC to negotiate for human rights protections and standards with Beijing.

Using this leverage, the IOC should immediately conduct effective due diligence to prevent human rights abuses that may be directly linked to the Olympics, its products or services. It should also identify areas with the most significant risk of harm, such as Olympic products being produced in Xinjiang by forced labor, and make dealing with those cases a priority.

When Tibetan, Uighur, Hong Kong and Chinese victims of Beijing’s repression told IOC leaders in October about imprisonment, torture, enforced disappearances and deaths of family members in Chinese custody, the IOC responded coldly by saying that “awarding the Olympic Games to a national Olympic committee does not mean that the IOC agrees with the … human rights standards in its country.”

In a statement last fall, IOC President Thomas Bach said the Olympic Games “can set an example for a world where everyone respects the same rules and one another.” Yet Chinese authorities are setting the opposite example by flouting the rules for hosting --- and the IOC appears poised to let Beijing get away with it again.


Minky Worden
Minky Worden is the director of global initiatives at Human Rights Watch and the editor of “China’s Great Leap,” a book on the 2008 Beijing Olympics. She wrote this for the Los Angeles Times. -- Ed.