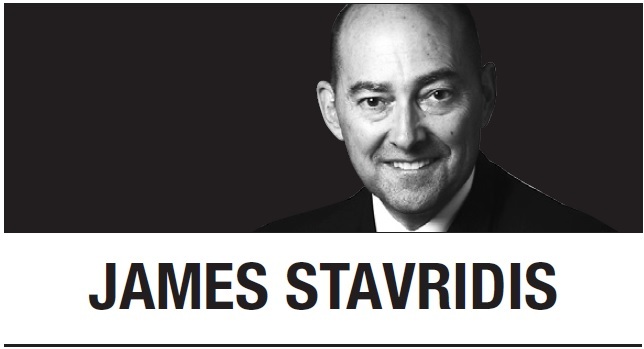 Over the four years I led the Afghan war effort as supreme allied commander at NATO, I was lucky to have four superb generals working for me as the in-country commanders of the International Security Force, Afghanistan. Generals Stanley McChrystal, Dave Petraeus, John Allen and Joe Dunford all performed superbly during their one-year assignments in Kabul.

I relied on their military advice every day as I reported to the senior civilian leaders of the 28 NATO nations, from President Barack Obama to German Chancellor Angela Merkel to UK Prime Minister David Cameron and many others. The generals shared one common vision: That our efforts were important to the security of the US and its allies; and that we should therefore remain in Afghanistan until circumstances permitted a “conditions-based” withdrawal.

That phrase, “conditions-based,” has been used frequently over the past few years of on-again-off-again negotiations with the Taliban. Led from the US side by special envoy Zalmay Khalilzad, these talks have gone further than many would have predicted. The US has been able to draw down its forces steadily for most of the past decade. But the Taliban have not kept their side of the bargain, and violence is increasing in much of the country. Should the US continue to draw down its troops?

In my four years in command, we had more than 150,000 troops spread all over the country, representing not only NATO members but an additional 22 countries as well. In addition to fighting the Taliban, our mission was to train the Afghan security forces to take our place on the front lines. We did so successfully, and by the time Obama left office in 2017, US forces had been reduced over 90 percent, to around 15,000.

During the Donald Trump presidency, the forces continued to decline, as did casualties. We are now down to around 3,000 American troops. And this month we hit a major milestone: There have been no US combat deaths for a full year.

The negotiations have led to an agreement for all US forces to return home by May 1 -- but only if conditions permit. It is very clear that conditions do not permit a full withdrawal, and it seems unwise to plan on a final exit any time soon. The Afghan Study Group -- chartered by Congress, run by the US Institute for Peace, and co-led by Dunford, who was chairman of the Joint Chiefs of Staff from 2015 to 2019 -- said as much in its final report issued this week.

“Without understating the challenges ahead, the ongoing Afghan peace negotiation presents a unique opportunity to bring peace and stability to Afghanistan,” Dunford told me last week. “We should seek to take advantage of this opportunity, but we should do so in a way that secures our national interests, ends the war, and preserves the gains made by the Afghan people over the past few decades.”

New Secretary of Defense Lloyd Austin is a former commander of US Central Command, which includes Afghanistan, so expect a high level of attention and detailed knowledge directed at the force levels in Afghanistan. The Pentagon is conducting a global “force posture study,” meaning an analysis of troop levels in all locations with a high density of American forces: Germany, Japan, South Korea and many other places. Look for it to recommend upping troop strength in Afghanistan to around 5,000, something Central Command has been lobbying for over the past year.

The case for maintaining a small yet strong military presence in Afghanistan is sound, if not popular. The US doesn’t want to see the country slip back into the essentially ungoverned state that existed before the 9/11 attacks, conditions that allowed al-Qaida to take hold so strongly and launch the attacks on US soil. Costs have already been reduced enormously by drawing down 95 percent of the US forces. There are also about 5,000 non-US NATO troops on the ground, more than America’s commitment at this point.

The future of those combined forces will be discussed in depth at this month’s meeting of NATO defense ministers in Brussels. If the US continues to pull forces out, the other NATO members will follow. The right balance would be about 5,000 US troops and 5,000 allied troops -- a credible force that would push the Taliban back to the negotiating table.

Think back on the end of the war in Vietnam -- helicopters lifting off the roof of the US embassy compound, a chaotic finale of a long, tragic misadventure. We need to avoid a replay of that in Kabul, not just for the security of Afghanistan, but of America as well.


James Stavridis
James Stavridis is a Bloomberg Opinion columnist. He is a retired US Navy admiral and former supreme allied commander of NATO, and dean emeritus of the Fletcher School of Law and Diplomacy at Tufts University. -- Ed.