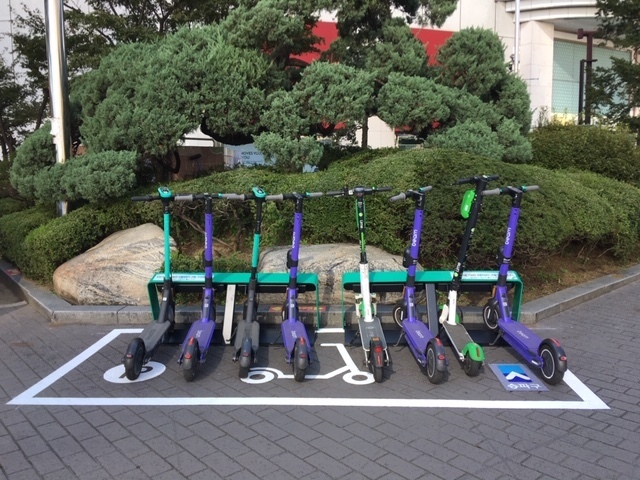 [1] Safety concerns are mounting ahead of the implementation of relaxed rules that will enable teenagers to ride electric scooters without a license, among other changes, amid a growing number of accidents caused by the popular new mobility option.

[2] Under the current Road Traffic Act, electric scooter riders must be at least 16 years old and have a motorcycle license. When the revised law takes effect Dec. 10, those aged 13 and older will be allowed to ride e-scooters on cycling paths, with no penalty for not wearing a helmet. The speed limit of 25 kilometers per hour is the only restriction that operators will have to comply with.

[3] But experts and some members of the public say the revision is prioritizing traffic convenience over safety, without considering factors that could lead to confusion and disruption among riders, nonriders and service providers.

[4] Thanks to their affordability and convenience for traveling short distances, the number of shared e-scooters in Seoul has soared from 150 in 2018 to 35,800 as of August this year. The phenomenon has resulted in a spike in injuries -- from 49 cases in 2016 to 890 cases last year, according to the Samsung Traffic Safety Research Institute.

[1] With many Korean dramas and movies heading to Netflix, the platform, with services in 190 countries, is becoming a major medium for the spread of Korean pop culture. Korea Trade-Investment Promotion Agency’s African sector recently mentioned Netflix as one of the reasons for the popularity of Korean culture in South Africa.

[2] The Chicago Council on Global Affairs announced in October that South Korea’s favorability is at 60 on a zero-to-100 scale, the highest yet. Besides favorability rising because of Korea’s handling of the COVID-19 pandemic, Korean programs reaching US audiences through Netflix was seen as a key factor.

[3] Netflix’s role in spreading Hallyu is even bigger in Japan, where Korean movies and dramas on Netflix are capturing Japanese viewers. For example, tvN’s hit drama “Crash Landing on You” starring Hyun Bin and Son Ye-jin started showing on Netflix in February.

[4] In addition, Korean TV dramas such as JTBC’s “Itaewon Class” and tvN’s “It’s Okay to Not Be Okay,” among others, have been at the top of the country’s Netflix charts for months, with the main characters’ fashion and hairstyles grabbing particular attention.