In what the city government called an “emergency standstill,” nighttime bus service has been slashed by 20 percent from Tuesday. Starting Friday, there will be no subway operations after 11 p.m., an hour earlier than the current closing time.

All of the city’s more than 5,380 day care centers have shut down as of Tuesday, though they are still providing emergency services for working parents.

As for outdoor rallies, the city government has imposed an outright ban on all gatherings of 10 people or more. And at the city center, including the popular rally venue Gwanghwamun Square, all events and gatherings are prohibited regardless of size.

These municipal measures, somewhat resembling the nation’s Level 3 restrictions, the strictest in its social distancing system, are aimed at curbing the spread of the coronavirus in the country’s densely populated capital of 10 million. 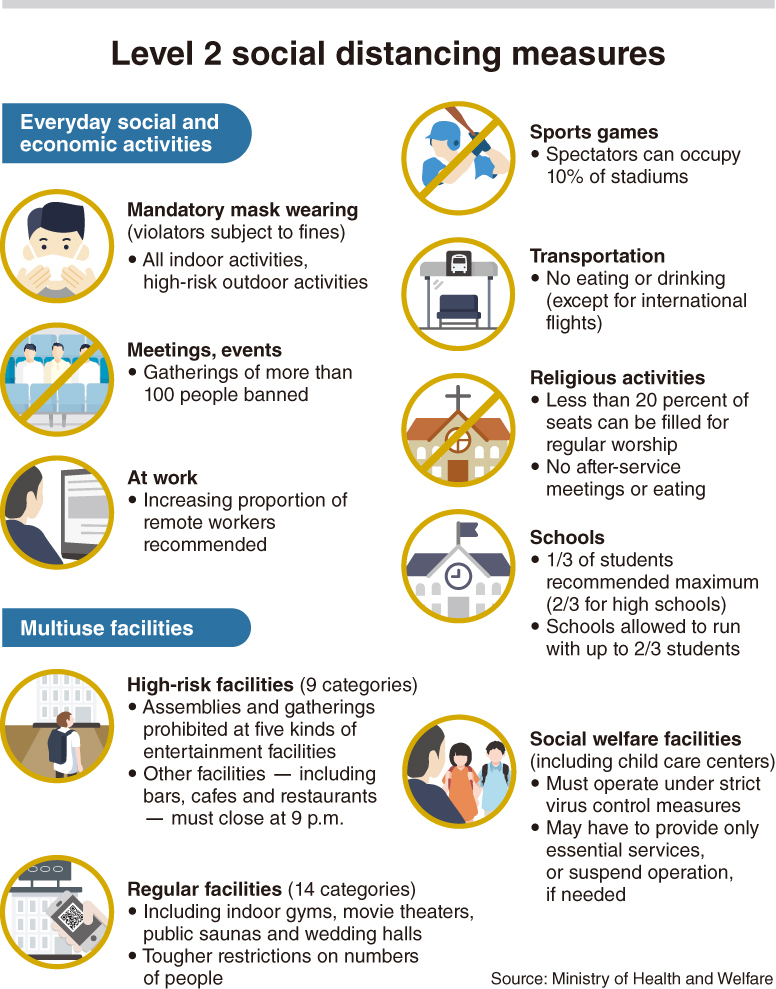 Seoul is at the center of a third wave of COVID-19 in South Korea. In the 24 hours ending at midnight Monday, the city added 133 new virus cases, raising its total caseload to 7,758, which accounts for a quarter of all cases reported in the country.

More than 1,400 Seoulites are currently undergoing COVID-19 treatment, and 87 have died from the coronavirus thus far.

For the standstill period, businesses in Seoul are subject to tougher antivirus rules than anywhere else in the country. The “one person per 4 square meters” rule will apply to funeral homes. No more than 40 visitors are allowed at the same time.

Youth facilities can only operate at 30 percent capacity. Indoor athletic facilities must stop running shower booths, except at swimming pools, and close at 9 p.m.

Retail stores, grocery markets and department stores will be asked to refrain from providing food samples to customers and run fewer promotional events, and cram schools must keep the number of students in the classroom to under 50 percent of the seating capacity.

No visitors will be allowed at medical care facilities, and patients will not be allowed to leave.

Door-to-door salespeople will be required to end each session in 20 minutes and cannot serve food or beverages to potential customers. Karaoke facilities will be forced to close at 9 p.m., and internet cafes will bar customers from eating or drinking while inside.

Also, in preparation for the upcoming nationwide college entrance exam Dec. 3, also known as the Suneung, the city government said it will run a special virus control period for a week until the test date jointly with the city’s education office and district governments.

The city will check quarantine protocols at more than 1,800 cram schools and study cafes while concentrating disinfection efforts on restaurants and cafes nearby.