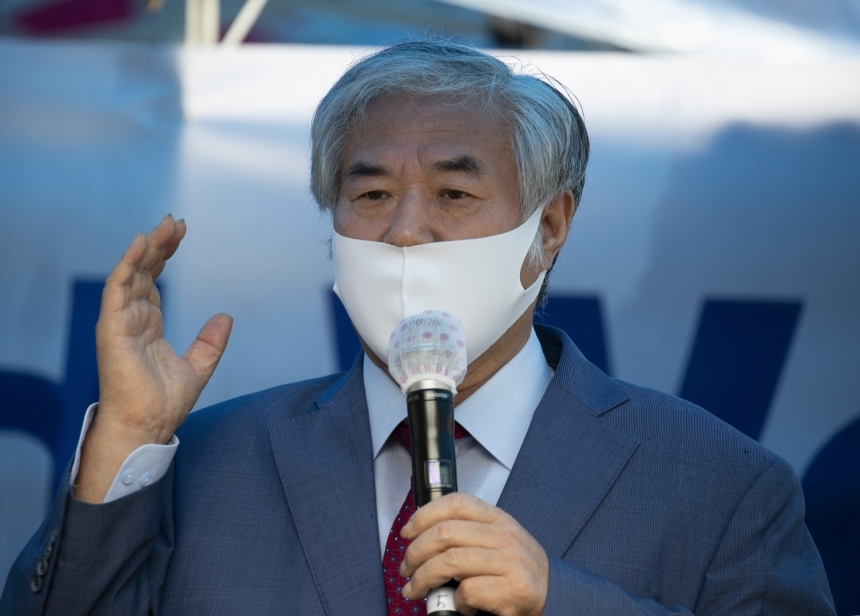 [1] As soon as he had recovered from COVID-19 on Wednesday, Jun Kwang-hoon, who leads the Seoul-based Presbyterian church that has emerged as the country’s second-biggest virus cluster, called the government’s antivirus measures a “fraud” designed to destroy his church.

[2] The far-right pastor repeated his claim that President Moon Jae-in and his administration were oppressing him for holding anti-government rallies, at a press conference held in front of his Sarang Jeil Church in Jangwi-dong, Seongbuk-gu, Seoul. It was held hours after his discharge that morning from the Seoul Medical Center, where he was sent after testing positive for COVID-19 on Aug. 17.

[3] “The government has been trying to remove me and our church whenever it finds a chance. They tried to put all the blame on us with the new coronavirus but failed thanks to wise judgment made by the public,” he said.

[4] Since the first case in the church was detected Aug. 12, a cluster there had been linked to 1,117 infections as of Wednesday at noon. Some 1,400 people connected to the church still haven’t undergone testing, according to health authorities.

[1] Health and beauty store Olive Young said Thursday it was preparing to apply for an initial public offering in 2022.

[2] CEO Koo Chang-gun announced the decision on the company’s in-house communication app “Olive Lounge” on Wednesday where he said work to file for an IPO in 2022 would start next year, with plans to attract pre-IPO investment.

[3] “It is to secure assets to support the company’s future growth. But there won’t be any change to majority shareholder CJ Corporation’s shares and its management rights, the CEO’s statement said according to one official.

[4] With the capital raised, Koo said he would seek other investment opportunities both at home and abroad such as mergers and acquisitions.

[5] Pre-IPO investment refers to private sales of blocks of stock before shares are made available on a public exchange.