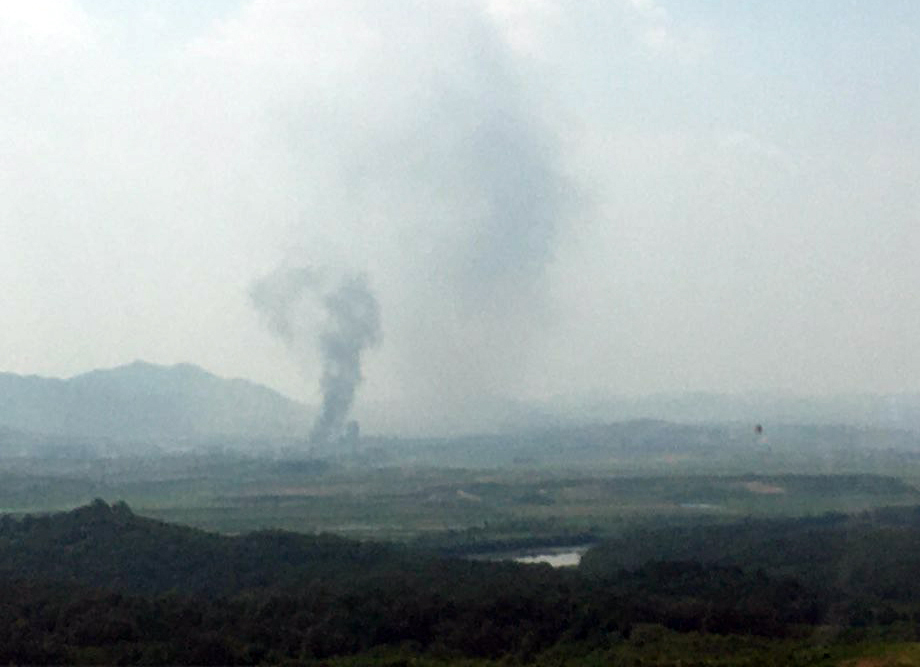 [1] North Korea on Tuesday demolished an inter-Korean liaison office in its territory near the border, following through on threats and leaving South Korea with little in the way of options.

[2] According to Seoul’s Ministry of Unification, the North blew up the four-story building at 2:49 p.m., hours after its military warned of refortifying areas disarmed in accordance with inter-Korean agreements. A National Security Council meeting presided over by National Security Office chief Chung Eui-yong was convened in Seoul at 5:05 p.m.

[3] “The government expressed strong regret at the North demolishing the inter-Korean liaison office that was established under the 2018 Panmunjom Declaration,” Kim You-geun, deputy director of Cheong Wa Dae’s national security office, said following the meeting. Kim said that the demolition is an act that goes against hopes for peace, and that the North has sole responsibility for all consequences that may follow.

[4] “We sternly warn that we will respond strongly if the North continues to take actions that deteriorate the situation.”

[5] The liaison office was established in September 2018, as agreed to by the two sides during the first summit between President Moon Jae-in and North Korean leader Kim Jong-un held on April 27.

*as agreed to by two sides: 양측이 동의한 것에 따라

[1] South Korea’s public health authorities on Wednesday said COVID-19 specimen were found on wheelchairs and other items used at facilities for senior citizens, largely due to insufficient disinfection.

[2] Infections have so far occurred at six senior welfare centers in Seoul and the surrounding area, of which transmissions at four facilities were traced to infected staff.

[3] “The epidemiological survey found there were many cases of virus patients working at senior-care facilities transmitting the virus. We also spotted inadequate management, with specimens found on common items, including wheelchairs,” Jung Eun-kyeong, director of the Korea Centers for Disease Control and Prevention, said at a briefing.

[4] Singing activities at the centers during which those present did not wear masks were also responsible for spreading the virus, Jung added.

[5] The country had a total of 12,198 infections, up 43 from the previous day, as of Wednesday, recording a slight increase in its daily tally, according the KCDC.
One patient died from COVID-19, pushing the death toll to 279, the KCDC added.