Hit by the recent pandemic, stock markets in other major nations also tumbled.

But their recovery was slower than the Kospi. The US’ Dow Jones Industrial Average rose 31.6 percent from its bottom-line as of Friday (local time). Japan’s Nikkei 225 and Taiwan’s Taiex rose 28.2 percent and 26.7 percent, respectively, as of Tuesday. 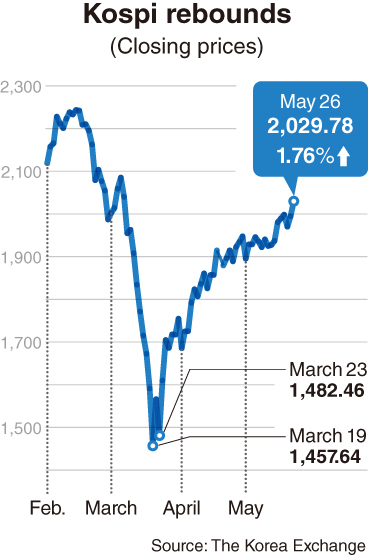 Fiscal expansion around the globe also increased liquidity in the market. In addition, extensive regulations in the real estate sector in Korea and uncertainty rising over other investment sectors have led local retail investors to seek profits from stock investments instead of alternatives, said Oh Hyun-seok, research head at Samsung Securities.

“Retail investors have returned to the local stock market with money that they previously invested in real estate, banking and cryptocurrencies, and this pattern of cash inflow from other investment sectors to the stock market is likely to continue for a while,” he said.

Offshore investors have been continuing their selling spree, but the size of foreign stock-selling has been decreasing, according to Lee Kyung-min, an analyst at Daishin Securities. Their interest in Korean stocks is changing too, as they have been buying considerable shares in information technology, bio-pharmaceutical and health care sectors.

“If you look at the local market by sector, foreign investors have recently injected their funds in the software, rechargeable battery, semiconductor and bio sectors. Due to the movement, some firms related to the sectors have been newly listed in the top 10 ranking in terms of market capitalization.”

While retail investors are likely to buy local shares with their deposits for stock investment, it is premature to say that the main bourse has settled around the 2,000-mark, according to the two experts.

To secure the 2,000-point level, the global financial markets have to stabilize, Lee said. At the same time, the escalating political tensions between the US and China over imposing the national security law in Hong Kong may be another variable for the stock market, he added.

“Since the emerging markets’ equity funds suffered outflows for weeks, it has become a burden for foreign investors. Even if they find Korea as an attractive investment market, they probably need to sell local shares to secure their funds,” Oh of Samsung said.