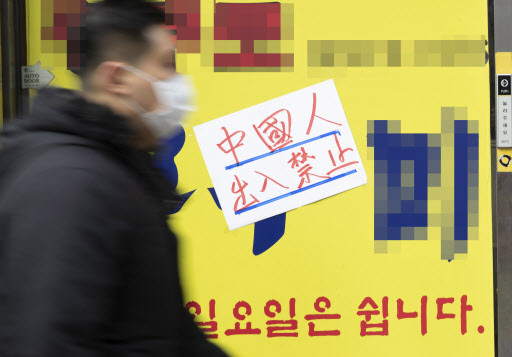 [2] “I will not assess (Seoul’s measure). … But an international and scientific method would be to follow the WHO’s recommendation,” said Xing in a press conference at the Chinese Embassy in central Seoul, referring to WHO Director-General Tedros Adhanom Ghebreyesus’ stance that travel and entry bans are “unnecessary.”

[3] “South Korea and China are friendly neighbors with close people-to-people ties. … It would be much appreciated if (both countries) protect their citizens all the while taking a scientific approach to help each other in the other person’s shoes,” Xing added.

*appreciated: 고마워하다
*in the other peron's shoes: 그 사람의 입장에서

[1] Public fears over the novel coronavirus that originated in Wuhan, China, are prompting many South Koreans to avoid Chinese people all together.

[2] As Koreans lock themselves up at home and shun places where they could run into Chinese people, shopping districts and sightseeing spots popular among Chinese tourists as well as neighborhoods with a large population of ethnic Korean-Chinese are unusually quiet and empty. Some Koreans even fear going to restaurants likely to be staffed with ethnic Korean-Chinese or language lessons taught by native Chinese teachers.

[3] “Those who have babies say they don’t even go to Chinese restaurants because they are likely to have Chinese staffers serving food,” said a mother of 10-month-old infant, surnamed Shim.

[4] “It is not that every Chinese is infected with the virus, but many of them might have visited their hometown during the Lunar New Year’s holiday and we don’t know when they came back to Korea,” she said. “There is no harm in being careful.”