The local stock market operator said in its report that there were 194 listed companies in the exclusive club at the end of last year, just one more than the previous year.

Seoul’s benchmark Kospi welcomed three new big caps, for a total of 168. The tech-laden secondary Kosdaq-listed firms fell by two to rest at 26. 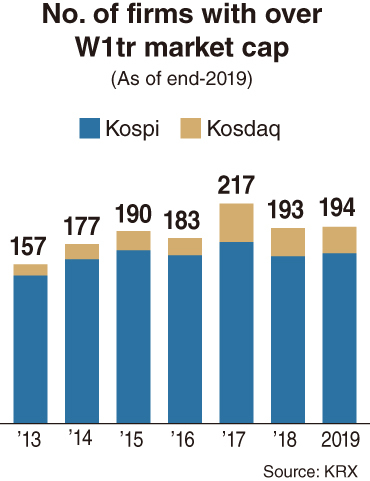 The stock market has faced uncertainties such as the prolonged US-China trade war, local firms’ poor business performance, Japanese restrictions on key export items from Korea and the pro-democracy movement in Hong Kong.

Amid this continued sluggish performance, the Kospi index closed at 2,197.67 points, up 7.67 percent on-year, on the last trading day of last year. The Kosdaq index closed at 669.83 points, down 0.9 percent, in the given period.