By Choi Ji-won
Published : Nov 8, 2019 - 16:41       Updated : Nov 8, 2019 - 17:18
On the wall of the main library in Seoul National University, yellow sticky notes with messages of support for Hong Kong protesters for democracy filled empty spaces Friday. One of the notes read, “I advocate (for the Hong Kongers) as one human being, remembering that liberty was not given but was achieved.”

A group of South Korean students on Wednesday transformed one side of the school’s main library building, hanging up sheets of large paper where people could write messages of support for Hong Kong’s protest.

The original Lennon Wall took shape in the 1980s in Prague, Czech Republic, being filled with graffiti art and song lyrics from the Beatles as a show of resistance against the communist government. It has symbolized democracy in Hong Kong since the Umbrella Movement in 2014, when such a mosaic wall was erected at its Central Government Complex. With the most recent protest, several makeshift Lennon Walls have been raised in throughout the city as well as several spots -- especially near university campuses -- around the world.

With the spread of advocacy here, however, efforts to damage the walls have also arisen.

Prior to SNU, a bare wall in streets near Hongik University and another in Yongsan, both in Seoul, which had been transformed into the Lennon Walls now display messages -- mostly in Chinese -- lashing out at supporters of democracy for Hong Kong. Clumps of the yellow notes have also been removed from the wall in SNU, according to the student group.

On Monday, pro-Hong Kong banners hung around Yonsei University’s Seoul campus were taken down by unidentified people for a second time, after a student group first erected banners on Oct. 25. A witness of the first removal interviewed by local newspaper Chosun Ilbo said about five people identifying themselves as Chinese cut down the banners. They shouted “One China” several times as he tried to stop them, the witness stated. 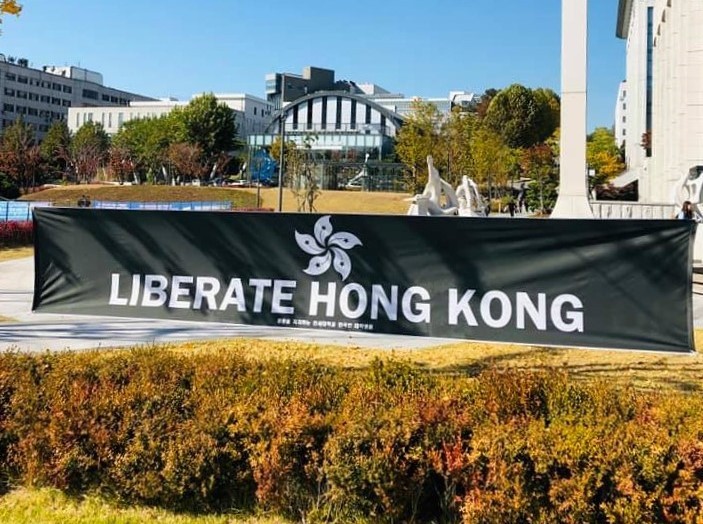 Despite continuous opposition from pro-China individuals, the students plan to set up Lennon Walls at other school campuses and are recruiting members to expand the group.

“As the international society voiced support for our democracy back when we fought against the military dictatorship (in the 1980s), Hong Kong is pleading for South Korea to stand with them,” a statement released on the group’s website read.

The rally, scheduled to start at 4 p.m. Saturday in front of Hongik University Subway Station exit No. 7, will include a short march and candlelit vigil.