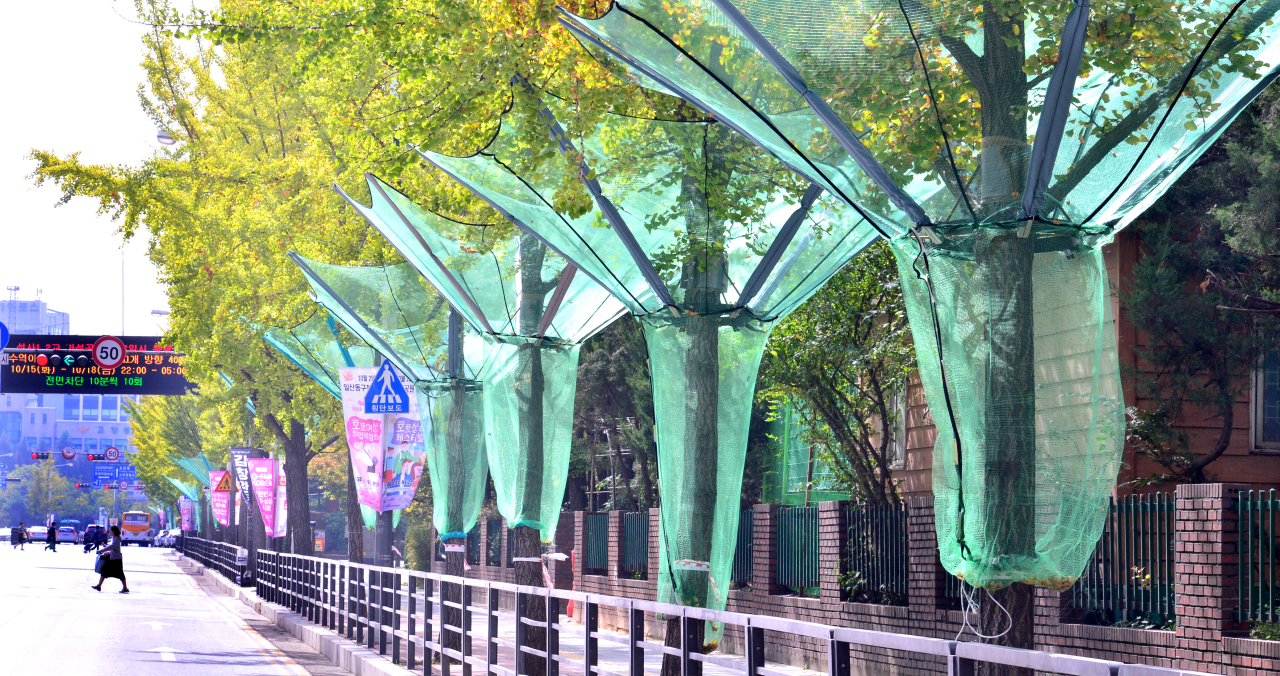 They are easy to grow, require virtually no maintenance once established and are tolerant of pollution. The seeds, harvested in fall, are believed to be good for the brain and for blood circulation.

On top of that, the leaves turn a spectacular fall color, providing a chance to enjoy the season’s beauty right in the middle of a busy city. 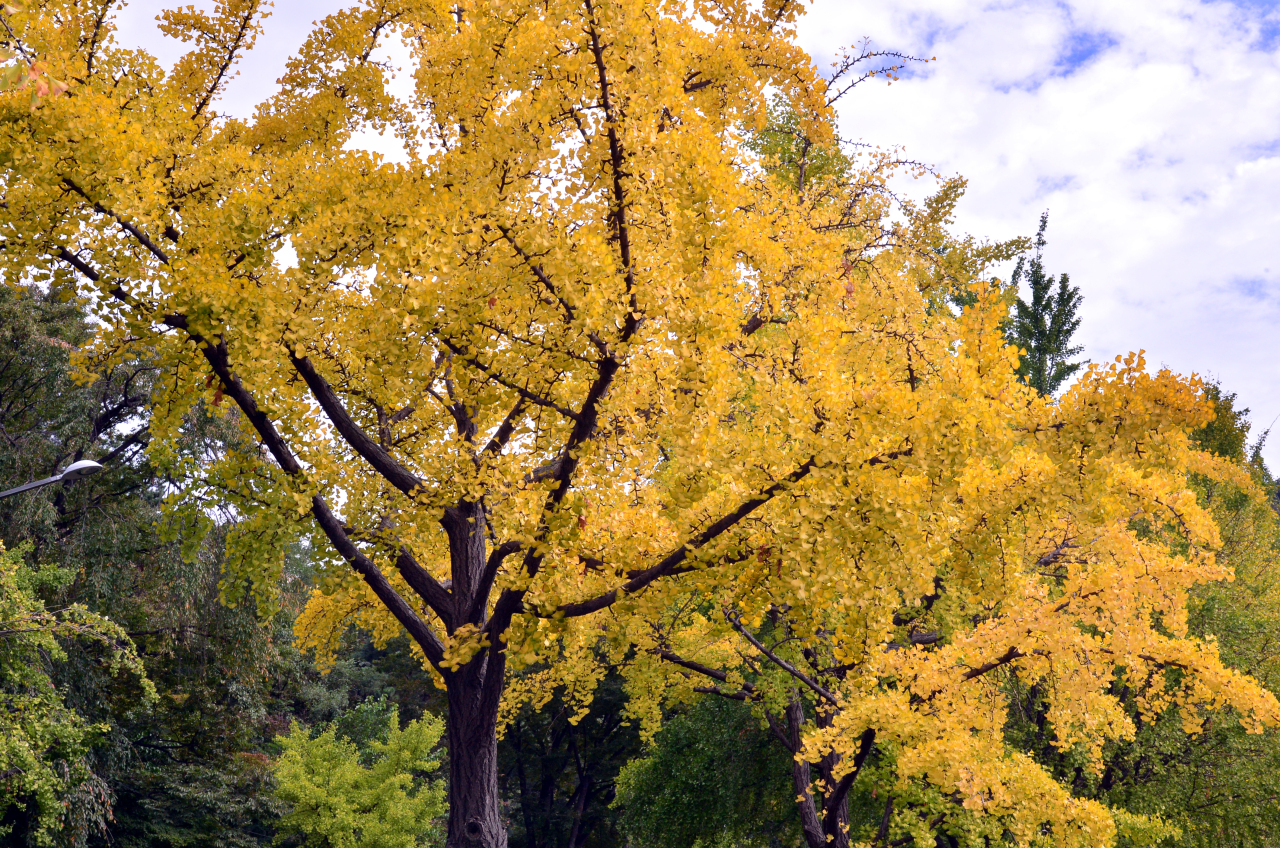 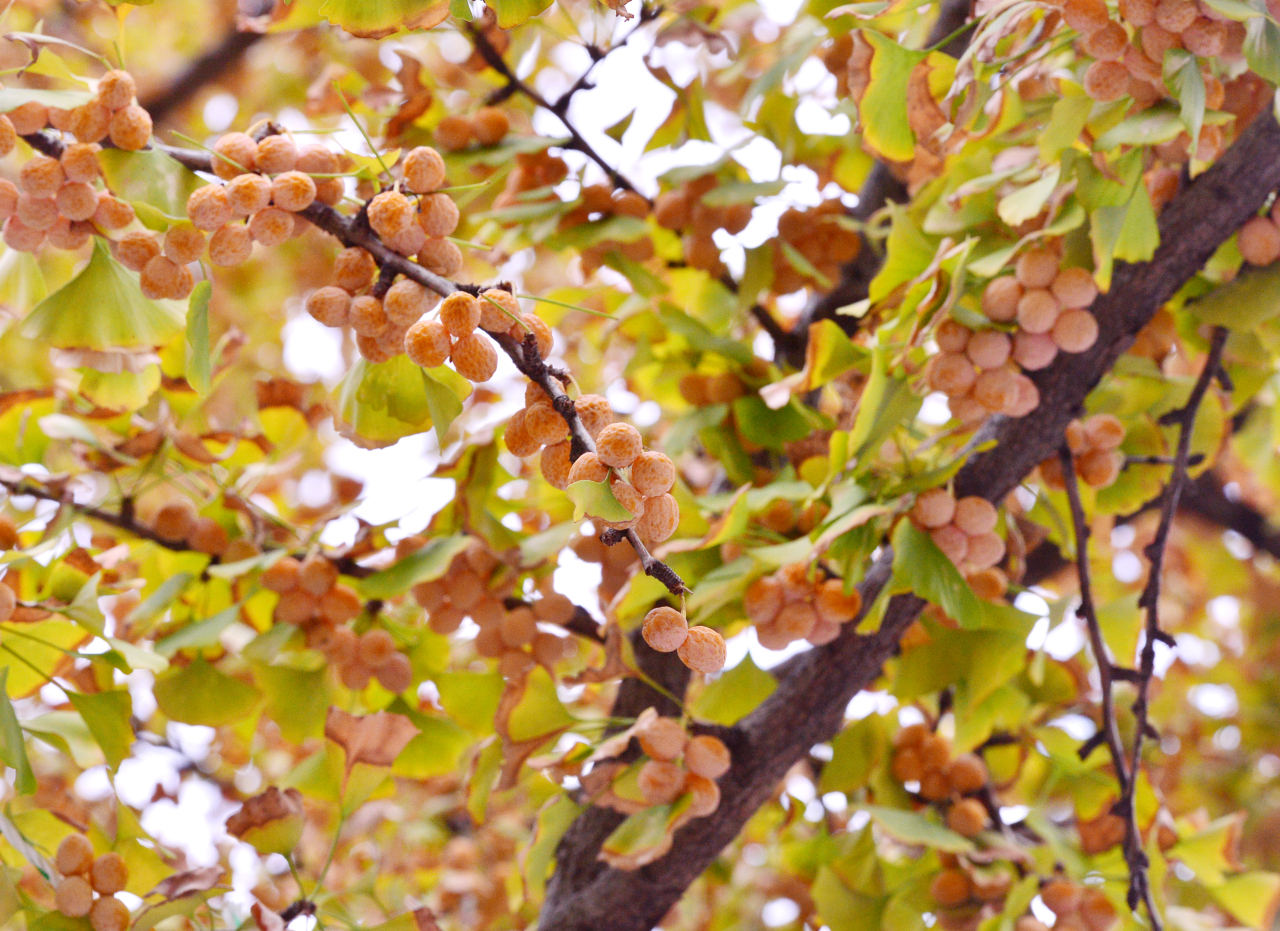 The treat, however, comes at a cost. Female gingko trees produce nuts that have a very strong odor, often likened to vomit, dirty socks or sewage. The odor is from a toxin contained in the soft flesh that covers the seeds. 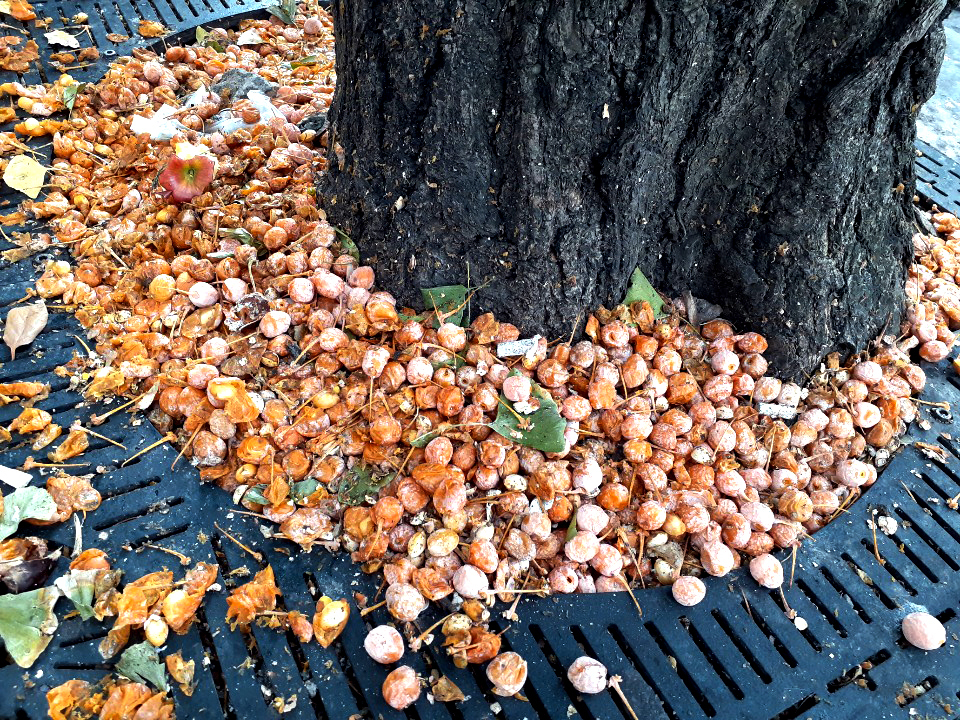 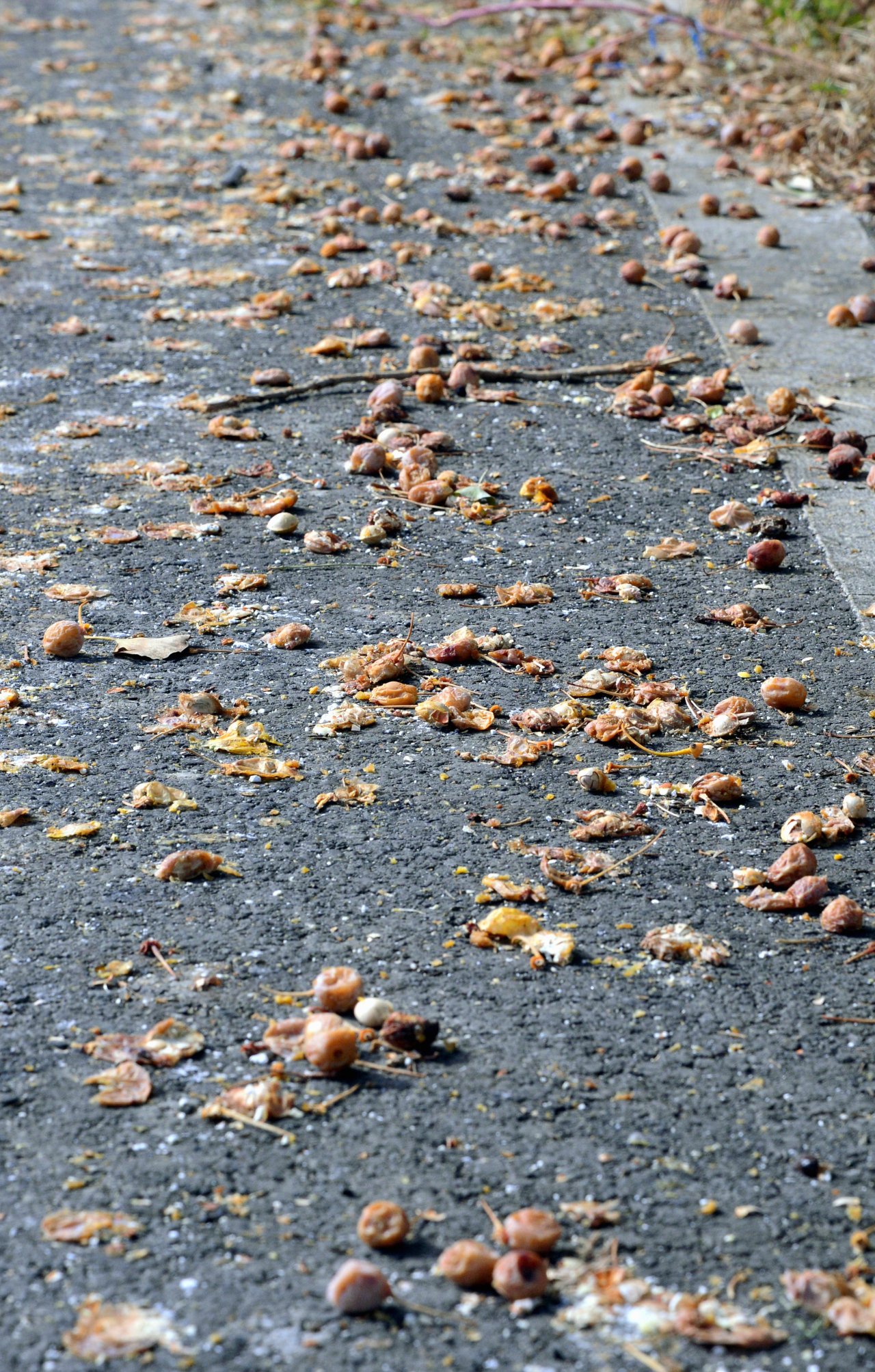 So for about two months in early fall, local authorities are bombarded with complaints over the smell. Some respond in the most conventional way -- a preemptive harvest of the nuts before they fall, get stepped on by pedestrians and emit the stench.

Others, like Goyang, Gyeonggi Province, think of creative answers.

“A trial (of installing a net around the trunk of female gingko trees) in selective areas garnered positive response from the public in previous years. 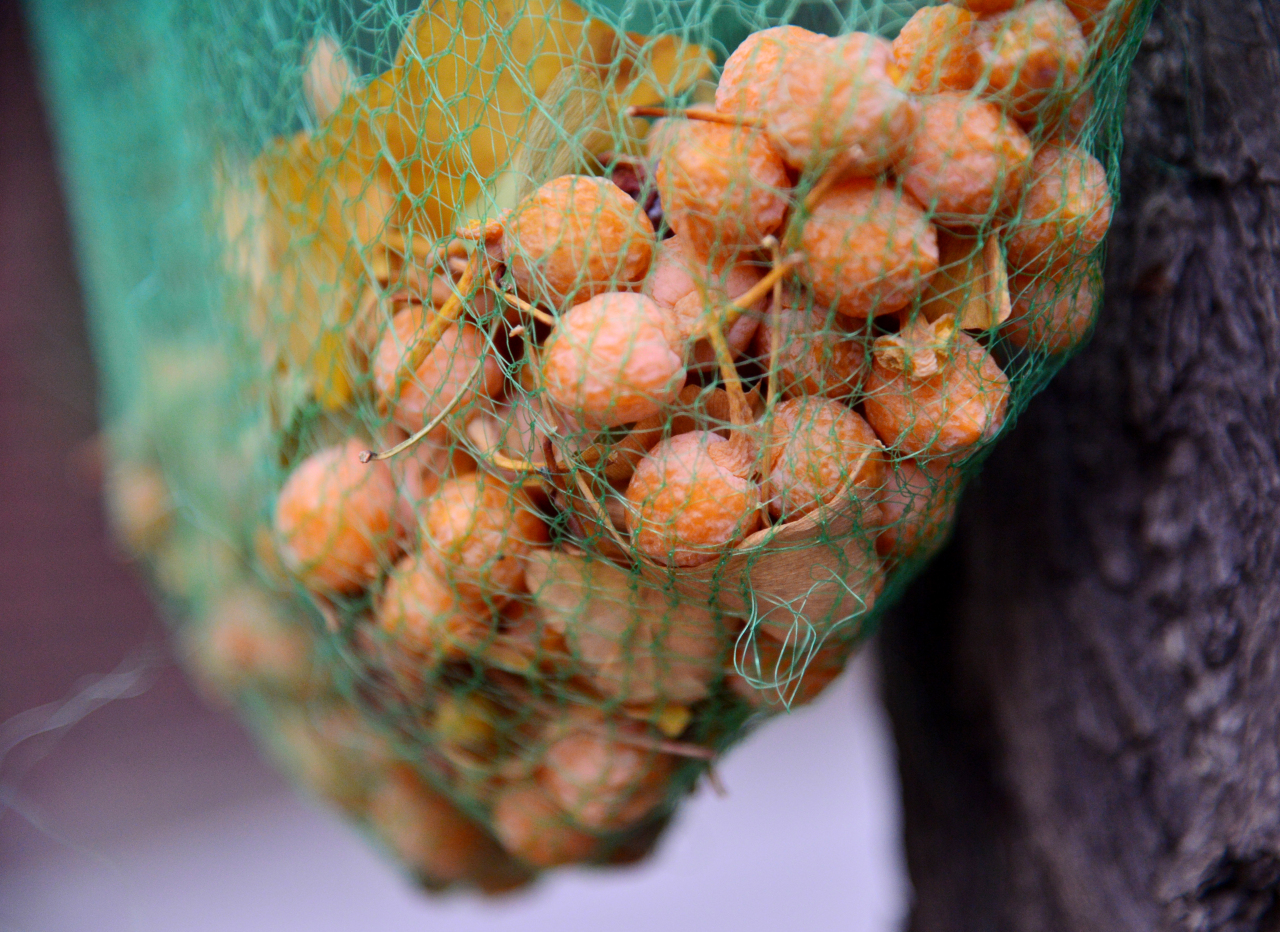 We were able to collect the nuts before they fall. We’re looking into expanding the use of the nets,” a Goyang city official said. The nets safeguard the pavement and pedestrians from ripe gingko berries while it saves them the difficult task of shaking nuts off the trees.

In a more drastic response, some female ginkgo trees are chopped down or get replaced.

Ulsan City has a plan to cut down roughly 4,200 female ginkgo trees, adding to the more than 5,000 trees that have been felled nationwide in the past six years.

Ginkgo trees are the most prevalent kind of roadside trees in Korea. There are about 114,000 gingko trees in Seoul alone, accounting for nearly one-third of the city’s street trees.