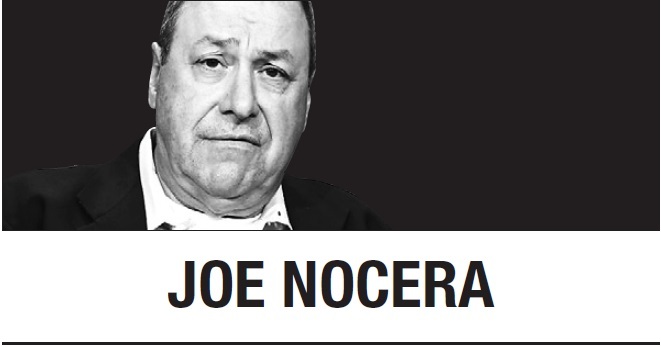 The sad degradation of the US Department of Justice’s antitrust division continues. An agency charged with upholding the nation’s antitrust laws, without fear or favor, has become just another tool President Donald Trump uses to reward his friends and punish his enemies in corporate America.

I don’t know how else you can characterize the news, reported by the Wall Street Journal on Friday, that the DOJ is investigating four major automakers that agreed to abide by California’s stringent tailpipe emissions standards -- and chose to ignore less onerous rules the Trump administration has proposed.

Wrote the Journal: “The Justice Department’s antitrust division is acting on its own accord and without direction from or coordination with the White House, according to one of the people familiar with the investigation.”

And the division didn’t consult with the White House when it tried to block the AT&T-Time Warner deal in 2017. It was just pure coincidence that Time Warner owned the news network Trump loathed more than any other, CNN. Nor did it consult the White House when it let The Walt Disney Co. and Twenty-First Century Fox deal sail through with only minor changes. Who could possibly have known that Fox chairman Rupert Murdoch was the closest ally the president has in the media?

It could well be true that the White House wasn’t consulted before the antitrust division acted. Before he was the named the Justice Department’s antitrust chief, Makan Delrahim was the deputy counsel for the Trump White House. Maybe he doesn’t have to talk to the White House to intuit what Trump wants. He knows who butters his bread.

Here’s a little thought exercise. Suppose four companies -- Ford Moto, Honda Motor, BMW and Volkswagen -- had jointly decided to sign onto Trump’s lower emissions plan. Do you think Delrahim’s antitrust minions would be launching an antitrust investigation? I don’t either.

The very idea that an automaker can violate antitrust laws by adhering to higher emissions standards is ludicrous. The theory is that the four companies may have talked to each other and then approached California with a proposal. This is apparently evidenced by the fact that the state agreed to lower its emissions standards by a small amount. I have no doubt that the companies consulted with each other before talking to California. No company wants to go up against Trump alone; it makes perfect sense that they would want to band together. It also makes sense that they would negotiate with the state, just as any regulated industry might. That behavior is hardly an antitrust violation.

The truth, of course, is that Trump is at war with California, and has been since he took office. California voted overwhelming for Hillary Clinton. California is a blue state. California is in the vanguard of the resistance. (In May, California filed its 50th lawsuit against the Trump administration.)

Battling emissions standards is part of that war. It is widely expected that the administration will soon attempt to revoke California’s ability to set its own emissions standards, and declare that they are “preempted” by federal law. This will undoubtedly lead to a court fight, though as my colleague Noah Feldman has pointed out, California’s waiver was built into the Clean Air Act by the US Congress. Trump’s Environmental Protection Agency really doesn’t have the legal right to withdraw the waiver, but that reality has rarely stopped Trump before.

Automakers are now in an awful spot. They had all made their peace with higher emissions standards, which also allows them to be good corporate citizens. They are technologically capable of meeting the standards. They can satisfy environmentally conscious car buyers. Because the California standards are followed by 15 other states, automakers have largely used its standards for the entire country. It’s really a nonissue.

Or it was until Trump decided to roll back the higher standards the Obama administration had proposed. The California standards offer predictability and certainty. The Trump plan creates uncertainty. It is exactly what companies don’t need, and do not want.

The Justice Department’s decision to scrutinize the agreement between California and the four car companies injects another kind of uncertainty -- a more menacing kind. It suggests that Trump will use the power of the state to bend companies to his will. That’s what happens in places like Russia, or China. It’s not supposed to happen in the US

Companies need to know that they can count on the rule of law. There is hardly anything more important. That’s the scariest part of what the antitrust division appears to be doing. Investigating companies for seemingly political reasons makes a mockery of the fundamental idea that the US has a government of laws, not thugs.


Joe Nocera
Joe Nocera is a Bloomberg Opinion columnist covering business. He has written business columns for Esquire, GQ and the New York Times, and is the former editorial director of Fortune. His latest project is the Bloomberg-Wondery podcast “The Shrink Next Door.” -- Ed.