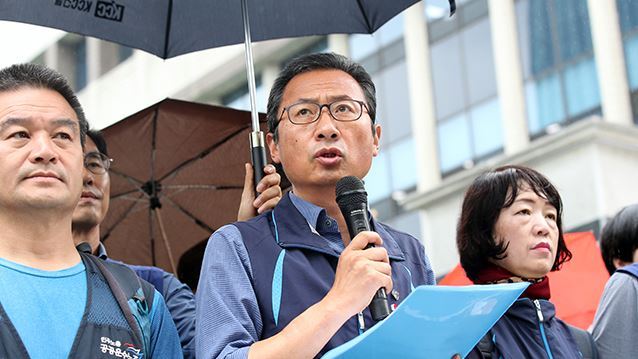 [1] The police have requested an arrest warrant for Kim Myung-hwan, the chairman of the Korean Confederation of Trade Unions, on charges of planning and carrying out illegal protests in front of the National Assembly in March and April, the police said Tuesday.

[2] The latest move comes at a sensitive time, amid heightening tensions among labor, management and the government over South Korea’s pending ratification of four core International Labor Organization conventions.

[3] The hard-line Korean Confederation of Trade Unions is one of the two biggest labor groups in Korea and has some 1 million members.

[4] According to the Yeongdeungpo Police Station, Kim faces a slew of charges that include interfering with public officials’ execution of their duties, damaging public goods, interfering with traffic, trespassing in a public building and violating the law on protests.

[5] “Based on evidence collected from the scene and analysis of seized goods, we have concluded that there is significant suspicion Mr. Kim led the illegal and violent protests. There are also concerns that he may take flight and destroy evidence,” the police said.

[1] On the first day of K-pop sensation BTS' first-ever fan event and concert in Busan this weekend, a number of people were blocked from entering the venue although they had tickets in their hands.

[3] Officials from Big Hit Entertainment, the management agency of BTS, demanded buyer information on the tickets match the ticket holder's identity documents at the event Saturday.

[4] Teenage fans who bought tickets using their parents' names were turned down, while students who brought copies of their student ID cards instead of the actual IDs were not accepted either.

[5] Big Hit said it has already posted an announcement on ticket purchasing sites, the BTS' fan cafe and social media that it would undergo tighter identification checks, before opening online ticketing of the Busan concerts. Although fans and their parents kept complaining of the stricter-than-expected practice on the second day of the concerts Sunday, the company did not budge an inch and remained adamant about the ticket-ID matching requirements.