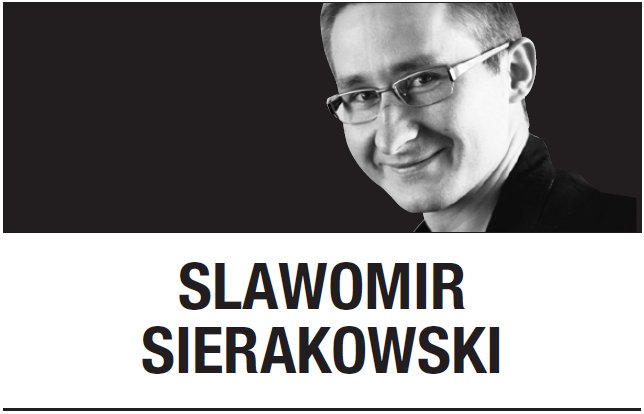 Following the death of Pope John Paul II in 2005, a group of young Polish activists and artists donned T-shirts that read, “I did not cry for the Pope.” At a time of seemingly obligatory national mourning, it was the kind of provocative act that can only happen in a free, pluralistic society. In a country as staunchly Catholic as Poland, the meme immediately caused a scandal. Yet because it was so effective, the “I-did-not-cry-for” formulation has been repurposed for similar situations ever since.

I was reminded of this episode recently when speaking to a French friend after the fire at Notre Dame. “Je m’en fous (I don’t care),” he said. No one died, and the cathedral is a symbol of Catholicism -- a creed with positive connotations for some, and quite the opposite for others. Moreover, he pointed out that billions of euros will now be spent repairing the damage, even though there are far more urgent needs around the world.

He has a point. But every country also has its particularities. In France, the public debate following the fire has been refracted through the lens of economics -- specifically distributive justice -- whereas in Poland it has been about culture. Given that France is a far wealthier country than Poland, one might think that it should be the other way around. But this difference reflects what each society holds sacred.

Consider the reactions in Poland. For Tomasz Terlikowski, a right-wing commentator for the pro-government weekly Do Rzeczy, the fire was a sign of the impending apocalypse. “The Church is burning, Europe is burning. Twilight has come,” he warned. “If we do not convert, we will all burn.”

Similarly, Magdalena Ogorek, a journalist at a public television station, lamented the symbolic timing of the blaze. “Four days until Good Friday,” she wrote, “In a year, a new mosque will surely have been built in the area.” And, to top it off, “This tragedy has a metaphysical dimension,” the nationalist pundit Rafal Ziemkiewicz concluded darkly. “I do not believe that the French state in its current condition can guarantee a fair investigation into the causes of the fire. I won’t say any more.”

These hysterical, xenophobic outbursts elicited an equally emotional reaction from the more enlightened segments of Polish society. One typical response from a usually serious and subdued commentator for Krytyka Polityczna asked, “Are they f****** insane?” It was duly retweeted by Radek Sikorski, a former Polish foreign minister and current candidate in the European Parliament election.

Meanwhile, the fundraising was already underway in France, where multiple billionaires have pledged hundreds of millions of euros for the reconstruction effort. The response from some commentators was to point out that as much as 66 percent of such donations could be written off under French tax law, implying that most of the bill would be foisted back onto French taxpayers. Owing to the public-relations risks, some of the billionaires have since promised not to deduct their donation.

And yet, many are now wondering why businessmen with such princely sums of expendable cash haven’t used it to help the poor. As the French author Ollivier Pourriol put it, “Victor Hugo thanks all the generous donors ready to save Notre Dame and proposes that they do the same thing with Les Miserables.”

The stark difference between French and Polish reactions speaks to each country’s history. In Poland, the dominant political culture is one in which economic fears are sublimated as culture-war issues.

After the fall of communism in 1989, the only Polish leader who opposed then-Finance Minister Leszek Balcerowicz’s economic liberalization program was Karol Modzelewski, who passed away late last month. A dissident who spent almost nine years in prison, Modzelewski coined the name “Solidarity” for the trade-union movement that led the struggle against communism in Poland. Solidarity was founded in the country’s factories, where workers risked life and limb to participate in strikes that eventually broke the will of the communist rulers.

Nonetheless, when the transition from state to private ownership began, Modzelewski was alone in calling for the factories to be preserved for the workers. He was ignored, and Poland experienced the historical irony of having neoliberal shock therapy imposed not by foreign investors or crony capitalists, but by the leaders of the country’s biggest trade union.

Shock therapy led to widespread disappointment and a loss of faith in democracy, and the aftershocks are still being felt to this day, in the form of a culture war between the modern Poland of democracy and cosmopolitanism and the old Poland of “blood and soil.” This is the struggle that contains all others, including those for economic equality and distributive justice that seem to loom so much larger in France.