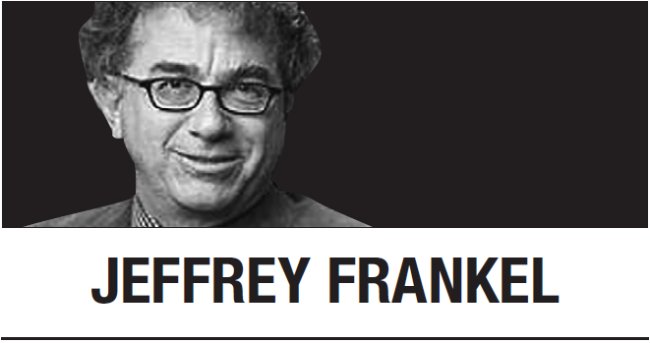 One of US President Donald Trump’s two intended nominees to fill vacancies on the US Federal Reserve Board of Governors -- Herman Cain -- has now withdrawn. Trump’s other potential pick, Stephen Moore, is also under an ethical cloud, and often gets his economic facts wrong. By contrast, Trump’s earlier appointments to the Fed have been sound choices, in particular Jerome Powell, the current chair.

Although Moore lacks a doctorate in economics, that is not a reason to oppose him. Fed appointees have long included people with business experience. Powell, for example, does not have one, either.

The big worry, however, is that Moore would be a Trump crony who does whatever the president wants, rather than what is best for the economy. Moreover, Moore’s views on the Fed’s interest-rate policy, and his support for returning America to a gold or commodity standard, are disturbing.

Moore has favored pro-cyclical monetary policy -- opposing stimulus when the economy needed it, and favoring stimulus when it was not required. When the Fed sought to boost the US economy in response to the 2007-2009 recession, Moore initially raised the specter of hyperinflation, and continued to warn of rising inflation in 2010, even when unemployment exceeded 9 percent. Needless to say, the bogeyman never showed up.

Employment then rose steadily over the following eight years, presumably increasing the risks of the US economy overheating. Yet Moore switched coats and attacked the Fed for excessively high interest rates. In December, he even suggested that Trump should fire Powell for tightening monetary policy. One is tempted to ask Moore if he turns on the air conditioning at home in winter and the heat in summer. The most plausible explanation for his change of course is that he started favoring stimulus when Trump took office.

Had the Fed followed Moore’s advice, it would have tightened monetary policy in 2010, prolonging the recession, and loosened policy in 2018, when unemployment was already below 4 percent. This would have destabilized the economy.

Moore’s shift is part of a more general Republican swing in favor of monetary easing. (Trump himself made the same switch in the direction of his attacks on the Fed, from 2011 to 2018.) Some media have portrayed this as a departure from decades of anti-inflation hawkishness. In fact, Republican administrations have been pressuring the Fed to ease monetary policy for half a century.

In the early 1970s, President Richard Nixon successfully pushed Fed Chair Arthur Burns to loosen monetary policy excessively -- leading to high inflation that the administration then tried to suppress with wage and price controls. Nixon also broke the dollar’s link with gold in 1971 and devalued the currency, ending the Bretton Woods era of monetary stability.

By contrast, all three Democratic presidents during the past 50 years refrained from pushing the Fed toward a more dovish stance. President Jimmy Carter appointed Volcker as Fed Chair in 1979 with a mandate to conquer inflation, even at the cost of a recession that reduced Carter’s chances of re-election the following year. And Presidents Bill Clinton and Barack Obama scrupulously avoided commenting on US monetary policy, thereby reinforcing the norm of Fed independence.

In addition to his pronouncements on interest-rate policy, Moore has repeatedly said in the past that he supports a currency regime under which the dollar would be convertible into a fixed amount of gold. In true Trumpian fashion, Moore recently denied having advocated this, despite clear video evidence to the contrary. He now says he favors a monetary policy that focuses on a basket of commodities, and not only gold.

Although this suggestion has drawn criticism, a price index based on a variety of commodities would at least make the economy less vulnerable to the volatile gold market. After President Franklin D. Roosevelt took America off the gold standard in the 1930s, for example, two leading economists, Benjamin Graham and John Maynard Keynes, discussed the merits of a hypothetical commodity-basket standard.

In the late 1970s, those who hitched themselves to Reagan’s 1980 presidential campaign and famously called for large tax cuts -- which, they said, would pay for themselves -- also tended to believe that America should consider returning to the gold standard. Rep. Jack Kemp and others continued to campaign for a return to gold in the 1980s, arguing that the Fed would then be able to ease its tight monetary policy, which they thought was the only thing that had prevented their supply-side revolution from succeeding.

As some pointed out, the rise of a small-government populist arguing in favor of the gold standard turned the history of American populism on its head. During the deflationary 1890s, Democrat William Jennings Bryan had campaigned for the presidency by memorably declaring that farmers and workers would refuse to be “crucified on a cross of gold.” For him, an easier monetary policy required abandoning the gold standard.

On this issue, Bryan was ahead of his time. It would make no more sense to go back to the gold standard than to heating all our homes with coal.

In recent times, the Fed has shown that it can fight to achieve monetary stability more effectively on its own -- so long as it has competent appointees and institutional independence. The US Senate should keep that in mind if and when it considers Moore’s nomination.