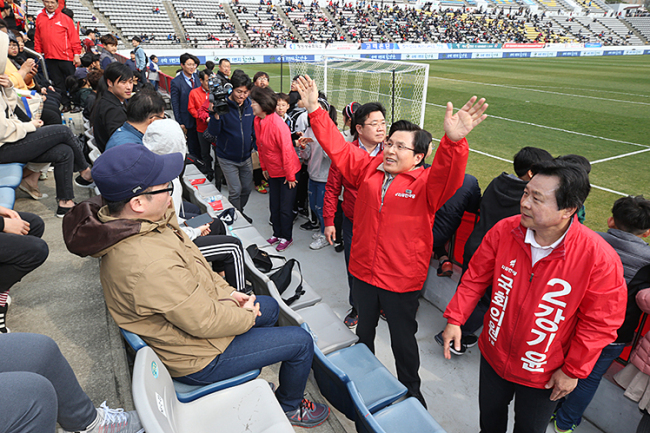 [1] In the final sprint to the April 3 parliamentary by-election, main opposition Liberty Korea Party leader Hwang Kyo-ahn and the party’s Changwon district candidate Kang Ki-yoon on Monday were blasted for violating the K League’s ban on campaigning inside a stadium of the soccer league over the weekend, while Gyeongnam FC said they may be subject to punishment.

[2] Demanding an official apology, Gyeongnam FC released a statement detailing the incident. “While checking tickets, the security company told them (Liberty Korea Party campaigners) that they cannot enter the stadium wearing clothing with the party name, and the candidate’s number and name.

[3] But some campaigners ignored the notice and refused to change their clothing,” the statement said.

[4] The statement added that the club will seek ethical responsibility from Kang and take legal action depending on the punishment imposed by the K League.

[5] On Monday, a spokesperson said that the first-ever incident involving political activity will be referred to the committee tasked with determining penalties. The meeting will convene Tuesday morning. “The KFA and FIFA strictly ban political and religious activities inside a stadium,” the spokesperson told The Korea Herald.

*be referred to: ~로 언급되다

[1] An acquaintance of K-pop star Seungri has testified that the celebrity procured prostitution at locations in addition to the ones alleged so far, a local news outlet reported.

[2] According to Ilyo Shinmun, police investigating the case obtained testimony from Seungri’s close acquaintance after two rounds of questioning on March 25 and 28.

[3] The acquaintance testified that prostitution took place at Seungri’s 2017 birthday party in the Philippines, where he was visiting for business, and Club Arena in Seoul, where he treated his investors, and that the singer “procured prostitution at other places.”

[4] The report added that the acquaintance was in charge of managing involved women and paid them 4 million won ($3,518) per person for overseas trips and 2 million won for tasks at local clubs.

[5] Prior to the testimony, the Seoul Metropolitan Police Agency said, “We have obtained meaningful testimonies and the investigation has moved forward. We have also booked Seungri for distribution of illegally filmed videos.”