Deloitte Anjin plummets down in ranking by size

It also narrowed down the gap in sales, poised to clinch the game while the rival company struggles to recover from the spillover of an extensive accounting rigging scandal. 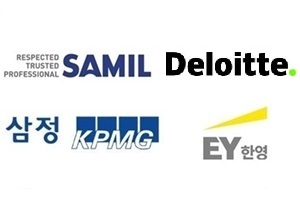 According to the Korean Institute of Certified Public Accountants, the number of accountants at EY Han Young stood at 1,032 as of end-2018, up 187 from a year earlier. The corresponding figure for Deloitte Anjin remained at 957, down 64 from the previous year.

The industry forerunners -- Samil PwC and KPMG Samjong -- had 2,003 and 1,560 accountants, respectively.

Up until 2013, the Seoul branch of the US-based accounting firm Deloitte was the market’s second-largest player in size.

A clincher in the company’s business downturn was its connivance of the multitrillion won accounting fraud by financially distressed shipbuilder Daewoo Shipbuilding & Marine Engineering.

In 2017, the Financial Services Commission handed down an administrative penalty, banning the company from taking new clients for a year.

EY Han Young and Deloitte Anjin are also likely to have their sales ranking reversed in the near future, data showed.

According to the business report submitted to the market watchdog Financial Supervisory Service, EY Han Young achieved 265.4 billion won ($235 million) in sales for the fiscal year 2017, while Deloitte marked 291.9 billion won during the same period.

“Citing the enhanced external audit regulations, which happened to take effect last year, the company made all-out efforts in recruiting throughout 2018.”