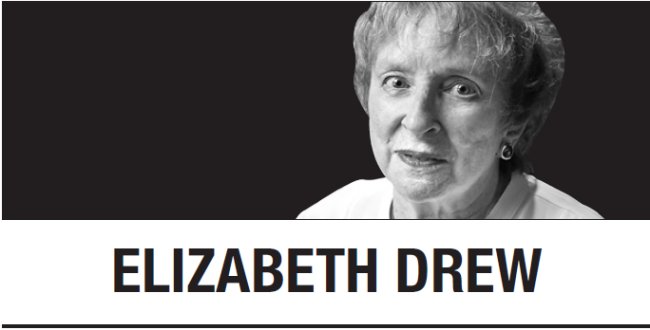 I used to think Trump might not even finish his first term, much less get a second. Now I’m agnostic. For one thing, the US Justice Department’s questionable view that a sitting president cannot be indicted is an inducement to fight to stay in office. Logic would suggest that Trump cannot make it through a re-election fight: His base, an estimated 35-38 percent of voters, is too small, and he has done next to nothing to expand it. And while he has governed for the base, he’s failed to fulfill many of his promises. But logic is not a trademark of the Trump presidency.

Much of Trump’s base is quite satisfied that he’s named two very conservative justices to the Supreme Court, he’s rolled back regulations on various industries and businesses and the wealthy got their tax cut. But business tycoons and the wealthy don’t attend his rallies and cheer his every utterance. Those who do tend to be middle- and lower-middle class voters, to whom he has delivered little other than the satisfaction of yelling at mentions of Democrats and chanting -- still -- “Lock her up!” even though their target, Trump’s 2016 opponent Hillary Clinton, has said that she won’t run again in 2020.

Trump is America’s first cult president. His followers delight in his insouciance toward the norms of political behavior, his dismissal of “political correctness,” and his skill at taking down opponents (like mocking the ultraliberal Democratic presidential candidate Elizabeth Warren, who has claimed Native American heritage, with the sobriquet “Pocahontas”). He skates on the edge of incitement and governs on the edge of danger. His disparaging of the press -- a fanatic Trump supporter roughed up a BBC cameraman at a recent rally -- satisfies his followers’ suspicion of “elites,” while helping him create a fact-free environment in which his thousands of lies define an alternate reality. His invention of a “national emergency” on the US-Mexico border channels his base’s bigotry (plus his own) and supposedly justifies an unprecedented presidential power grab (bipartisan majorities in the US Congress do not agree).

Trump’s success at solidifying his base could be his salvation in 2020 if the Democratic nomination process doesn’t produce a strong enough opponent or ends in hostility. And, though Trump appears to have committed several impeachable offenses -- accepting “emoluments,” or gifts or income from foreign sources, and obstructing justice, among others -- the Democrats are reluctant to be seen as seeking his removal from office, owing to the fierce opposition of Trump’s base. (Fanatic Trump supporters have threatened literal civil war if their hero is impeached or convicted.) Leading Democrats say that they will not begin impeachment -- or a vote in the House to indict a president on specific grounds -- without bipartisan support.

This could be a circular trap: It took some time for any Republicans to accept the possibility that Richard Nixon should be forced to leave office, and Trump’s base is both larger and more institutionalized (through Fox News, among other pillars). By launching a broad investigation of Trump’s private and public actions -- the House Judiciary Committee (which has jurisdiction over impeachment) this week sent out 81 demands for more information -- congressional Democrats are actually trying to prepare for impeachment. If this does not succeed, the theory goes, they will at least have damaged Trump’s re-election prospects. It would also be useful in case special counsel Robert Mueller’s anticipated report does not offer anything helpful. (No one outside that investigation has a clue as to what Mueller has found.)

Some of the figures now called before the committee were suggested by Trump’s former consigliere, Michael Cohen, who, in his own recent open testimony before the House Committee on Oversight and Reform, called his former boss a racist, a con man and a cheat. (Apparently he had also been helpful to the Democrats in closed testimony before the Intelligence Committee.)

Although the oversight committee’s Republican members portrayed Cohen as untrustworthy because he had been convicted of lying to the US Congress and will soon go to jail, they noticeably did not defend Trump. (Cohen had essentially lied to defend Trump, with his encouragement.) He also offered some evidence and anecdotes that could prove highly problematic for Trump -- for example, by suggesting that Trump knew in advance about the first WikiLeaks dump of Democratic Party emails and about the infamous meeting in Trump Tower between top Trump aides and Russian operatives. In the end, a poll showed the public believes Cohen over Trump by 50 percent to 35 percent.

There has already been conflict between the Democratic-controlled House of Representatives and the White House over the former’s demand for information on why intelligence officials denied Trump’s son-in-law, Jared Kushner, the high security clearance he needed to carry out some diplomatic tasks -- and why they were overruled by the president, a highly unusual (though legal) act. Kushner is suspected of using his public position to advance his private interests, namely raising funds for his family’s real estate business. More recently, it was revealed that the president ordered that his daughter Ivanka also be given clearance, though this is not required for her job, whatever it is. These are among the wages of Trump running the White House as a family business and of his indifference toward governance norms.

So was the failure of Trump’s meeting in Hanoi with the North Korean Dictator Kim Jong-un. The collapse of the talks on denuclearizing the Korean Peninsula was the result of Trump and his aides not preparing adequately -- such agreements are often precooked, or at least there are no great surprises -- and of Trump’s assumption that his powerful personality and what he sees as a close relationship with the brutal Kim would carry the day.

The failure of the Hanoi summit was to some extent offset by relief that Trump had not given too much away -- though he had been on the path to doing so. True to form, Trump and his aides blamed the outcome on the Democrats for holding the Cohen hearing on the same day. And, true to form, they were lying: The hearing date had been set first.