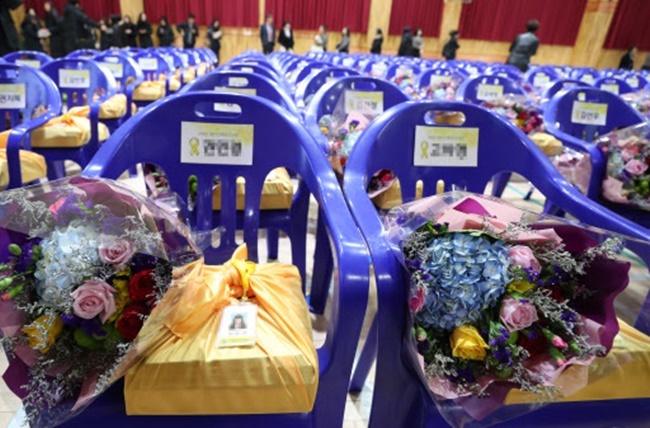 [1] A long-delayed commencement ceremony was held Tuesday for 250 Danwon High School students who died in the Sewol ferry disaster on April 16, 2014.

[2] The students were on a school trip to Jeju Island when the ferry carrying 476 passengers sank off the southwestern coast near Jindo, killing 304 aboard. Only 75 students survived, and they graduated in 2016.

[3] The victims’ families had asked the school to postpone the honorary commencement ceremony until all the bodies of the victims had been recovered.

[4] The bodies of two students -- Nam Hyun-chul and Park Yeong-in -- and a teacher, Yang Seung-jin, have not been recovered.

2. New KakaoTalk alert sounds include dog’s bark, ‘I love you’

[1] KakaoTalk, the most popular mobile messenger app in Korea, on Tuesday added new alert sounds to its service, ranging from a dog’s bark to the sound of money jingling. The update is the first in five years.

[2] “We developed the idea based on users’ practice of using different wallpaper for chat groups for identification purposes,” an official from KakaoTalk said.

[3] Of the previously available alert sounds, only the six most representative ones remain, while 26 new sounds have been added.

[4] In a promotional video on YouTube, a KakaoTalk message from the boss arrives with the sound of a dog barking --poking fun at the work-employee relationship.