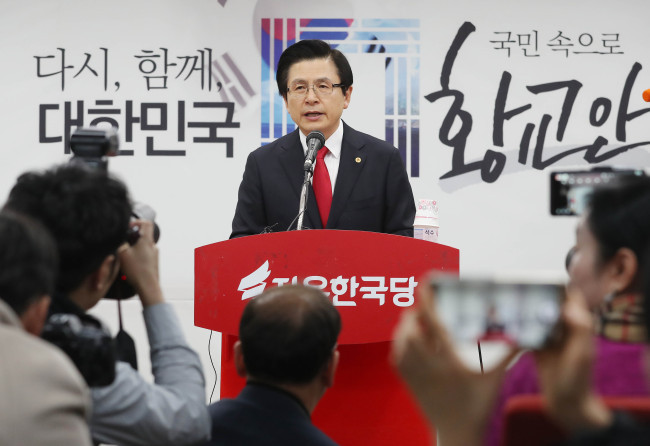 [2]Hwang’s bid faces strong opposition in the political arena due to the prominent role he played during the Park administration, such as his posts as prime minister and acting president.

[3]With competition for the party’s leadership heating up, some members of the main opposition party, including Chairman of the party’s emergency committee Kim Byung-joon, have expressed concern and disapproval toward Hwang’s candidacy, as the party struggles to break away from its links to former President Park.

[4]“The Moon Jae-in government’s tyranny is the root cause of all agony and instability. Activist political theories that should been buried are controlling South Korea’s government affairs in the 21st century,” Hwang said, declaring his candidacy at the Liberty Korea Party’s office in Yeouido, western Seoul.

[5]“The left wing’s outdated income-led growth policy has become the administration’s dogma. Entrepreneurs and small businesses were the first to be hit. Young people are unable to find jobs. I will save the country that is on the verge of going back to the past,” Hwang added.

[3]While Soi Mao’s main focus is Thai drinking food and wine, one cannot ignore the restaurant’s mouthwatering chicken dishes, from their “kai yang” to their “kai ping.”

[4]“Kai yang,” which is available for both lunch and dinner, is Soi Mao’s riff off a dish that hails from northeastern Thailand.

[5]While the original “kai yang” is slowly grilled over charcoal, Im explained their kitchen does not allow for such extensive grilling, so their “kai yang” is oven-baked, then the skin is fried to a crisp, before the meat is finished over a charcoal grill.

[6]The resulting protein is then served, heaped on a platter, with a side of sweet and spicy sauce. The flesh is snowy and tender and the skin is crisp and crackly, demonstrating how well-cooked chicken can be incredibly satisfying.

[7]Then there is Soi Mao’s “kai ping.” Only available at night, these chicken skewers feature meat that has been marinated in coconut milk and lacquered in fish sauce.