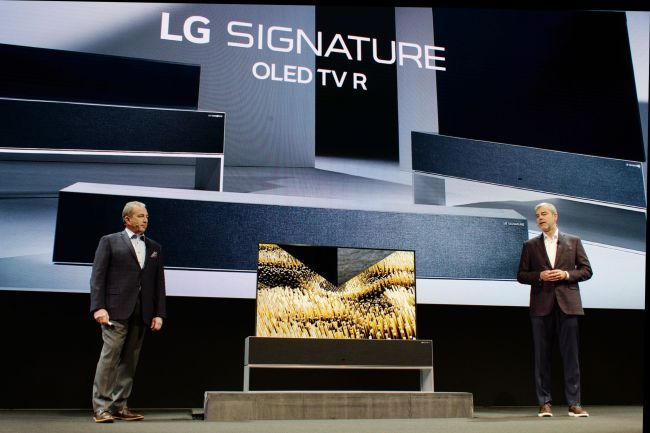 [1] Hearty cheers and camera flashes filled the venue of LG Electronics’ press conference as the tech giant’s 65-inch OLED TV screen gracefully slid down into a sound speaker box. It is a television that one has never seen before.

[2] A day before the opening of the Consumer Electronics Show 2019, LG Electronics unveiled the world’s first rollable organic light-emitting diode TV, with a plan to commercialize it in the second half of the year.

[3] The Korean TV maker presented its 65-inch LG Signature OLED TV R to the global press in what is going to be the industry’s first commercial flexible OLED TV.

[4] The “R” in the name stands for revolutionary, rollable and redefinition of the space, according to the company.

[5] Despite being described as “rollable,” the TV does not roll up but rather folds up like a blind. It comes with a rectangular sound speaker where the TV can be hidden when it is not in use. The TV does not have to be attached to a wall.

[1] When Korea’s two major holidays approach every year, people get ready to take part in fierce competition for train tickets to their hometowns.

[3] Korail allocated 70 percent of the holiday train tickets for online sale, but the quota usually sells out instantly. On Tuesday morning, the number of people using the holiday ticket reservation website at the same time peaked at 150,000, according to Korail. The difficulty in securing tickets has led to the process being called a “Reservation War” or “Class Registration for all Koreans,” comparing it to the fierce competition in signing up for college classes online.

[4] On Tuesday morning, it was easy to spot people seeking the remaining 30 percent of the tickets, which are sold at stations and travel agencies, at Seoul Station.