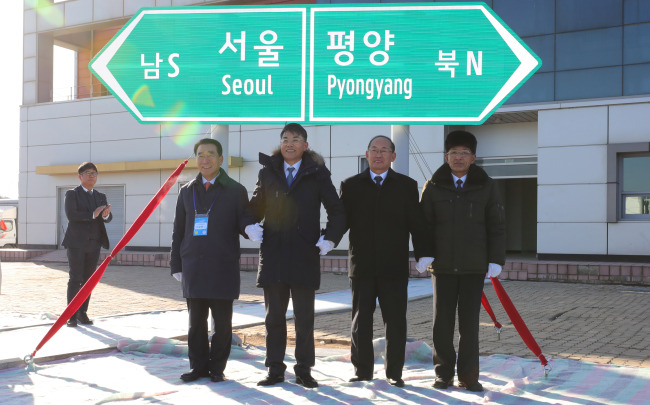 1. Koreas kick off groundbreaking ceremony for railways and roads

[1] The two Koreas on Wednesday kicked-off a symbolic groundbreaking ceremony for the reconnection and modernization of inter-Korean roads and railways. The event started around 10 a.m. at Panmun Station in North Korea’s border town of Kaesong.

[3] North Korea sent Ri Son-gwon, chairman of the North’s Committee for the Peaceful Reunification of the Country, and Vice Railway Minister Kim Yun-hyok to lead its delegation.

[4] Earlier this week, the United Nations granted Seoul sanctions exemptions for materials and items needed to hold the event in the North, following close consultations with Washington.

[5] The Koreas recently wrapped up an 18-day inspection of sections of cross-border railways in North Korea, running through the western and eastern coasts of the Korean Peninsula.


2. Ministry issues safety guideline on Tamiflu after death of teenager

[1] The Drug Ministry has issued safety guidelines on the use of the flu medication Tamiflu, following the case of a teenager who fell to her death after complaining of hallucinations.

[2] The Ministry of Food and Drug Safety distributed a letter explaining the possible side effects of Tamiflu to medical specialists and consumer organizations on Monday.

[3] According to the ministry, patients over 10 years old may show abnormal behavior under the influence of the medication, and there is also the possibility of a patient falling and consequent accidents.

[4] In the letter, the ministry advised medical professionals who prescribe the medication to young children or teenagers to inform parents of the possible side effects. It also advised against parents leaving their kids alone for at least two days after taking the medication.

[5] The letter came after a 13-year-old middle school student who took the medication died from a fall after complaining of auditory hallucinations and nausea. Identified by her surname Lee, she was found dead in front of her apartment building at around 5:30 a.m. Saturday. Police said she appeared to have fallen from the window of her room on the 12th floor.