Measures taken or considered by the new administration since Moon took office in May are expected to make companies shoulder up to 40 trillion won ($35.4 billion) in additional costs next year alone, analysts say. 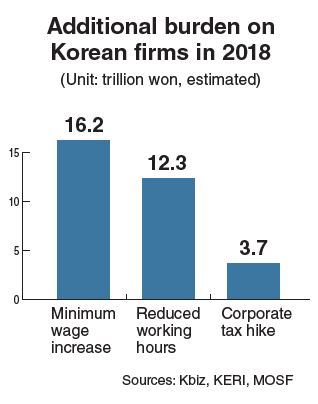 Many businesses will find it hard to absorb increasing labor costs as minimum wages continue to rise and working hours are to be reduced.

The decision made in July by the Minimum Wage Commission to raise the wage floor from the current 6,470 won per hour to 7,530 won next year is forecast to increase annual wage costs by more than 16 trillion won.

The Korea Federation of SMEs estimated additional labor costs could exceed 81 trillion won in 2020 if the minimum wage rises to 10,000 won as pledged by Moon during the campaign.

Cutting the maximum weekly working time from the current 68 hours to 52 hours as planned by the government would cost companies 12.3 trillion won in additional wages annually, according to analysis from the Korea Economic Research Institute, a private think tank.

A survey of 334 firms, conducted by CEO Score, which follows business performance, found their sales dropped 1.9 percent in 2016 from two years earlier, while labor costs rose 6.4 percent. The ratio of labor costs to sales also climbed from 5.4 percent to 5.9 percent over the cited period.

Local private businesses are also under pressure to follow public corporations in turning temporary jobs into permanent ones in line with Moon’s employment policy.

Large companies are set to pay 3.7 trillion won more in taxes next year as the draft tax code revision unveiled by the Finance Ministry early this month proposes raising the maximum corporate tax rate and reducing tax breaks on facility investment and research and development projects.

The Moon administration has repeatedly said its policy to phase out nuclear power plants will not result in an increase in electricity rates during his five-year tenure.

But experts indicate the implementation of the new energy policy would raise electric charges by 25 percent from the current level by 2030, with the bills for companies increasing by 7.5 trillion won over the cited period to 37.5 trillion won.

Such policies set to increase financial burden on companies have been matched with measures to tighten regulations on banking and distribution sectors. Restrictions on new industries also remain unchanged.

“The Moon government is putting pressure on companies to offer more jobs, but its policies will only drive local businesses offshore,” said a corporate executive, who wanted not to be named.

Some textile firms heavily burdened with labor costs have already announced plans to shut down factories here and move production facilities to Vietnam and other developing countries in search of lower wages and more tax incentives.

Trade, Industry and Energy Minister Paik Un-gyu met owners of local textile companies earlier this month to ask them to reconsider their plans, but got a lukewarm response.

The ministry also tried to persuade an association of carmakers here to withdraw a recent statement that they would consider moving assembly lines abroad if an upcoming court ruling upheld workers’ demand for an expansion in the scope of ordinary wages.

According to a report released by KERI in March, 11,953 Korean enterprises have gone offshore as of June 2016, hiring nearly 3.4 million workers in their host countries.

Only 30 companies have returned home since Korea enacted a special law on support for reshoring firms four years ago. In a survey early this year, half of them said they were dissatisfied with government support provided since their return. Only seven expressed satisfaction.

The KERI report said the country should create a more business-friendly environment by drastically removing regulations, making labor markets more flexible and curbing wage increases to facilitate the reshoring of companies particularly in the sectors that create more jobs and added value.

It indicated that if about 10 percent of manufacturers running factories overseas bring production back to the country, nearly 290,000 jobs would be created here, potentially leading to getting more than 60 percent of jobless Korean youths into the workforce.