The biggest problem for SK of late has been the pitfall of the “big inning,” where an opponent scores five or more runs in their half of the inning.

As of Monday, SK had played 18 games in July and conceded a big inning a staggering eight times. 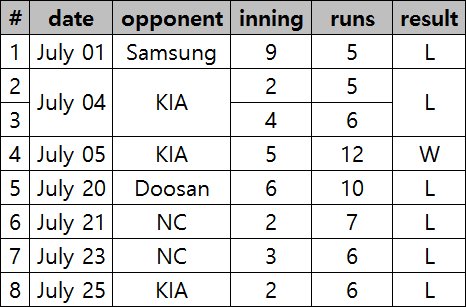 As might be expected, they lost six of the seven games where they gave up at least one big inning, only managing to win against KIA on July 5 because KIA’s pitching that day was even worse, allowing SK to escape with an 18-17 shootout win.

Both the big inning and SK‘s overall struggles have come in part because SK’s pitchers have not seemed able to find the strike zone. SK pitchers have walked 80 batters in SK’s 18 July games, by far the most in the KBO during that span. SK pitchers are walking 3.32 batters per nine innings in July, a huge jump up from the 1.4 mark they posted in the season’s first three months.

An Chi-yong, a KBSN Sports analyst, also pointed to the walk problem in identifying SK’s woes, saying, “The pitchers need to pay attention to their walk problem. If you walk too many batters, it’ll definitely create problems.”

KBSN’s An said, “SK is missing a lot of parts right now. They won’t win unless they find a way to fix these problems.”

If SK doesn’t find an answer soon, they may soon find themselves on the outside of the playoffs looking in, particularly with the tight competition this season.