It marked the second most monthly exports, following $51.6 billion in October 2014. The figure saw the sharpest on-year rise in nearly six years, following 25.5 percent in August 2011.

Meanwhile, inbound shipments also increased 16.6 percent, compared to the previous year, to $37.8 billion in April. The trade surplus jumped to $13.3 billion from $6.3 billion in March, showing a surplus for 63 consecutive months.

Outbound shipments continued to see on-year rises for six consecutive months from November, when exports rose 2.3 percent from a year earlier, for the first time in more than five years, since December 2011. The figure has been on an upward trend for four straight months since January.

From a year earlier, the volume of exports declined, while vehicles, semiconductors, petrochemical products and steel products drove up the unit value of exports, data indicated.

By category, shipbuilders showed the strongest outbound shipments in history, selling $7.1 billion in products such as ships and offshore platforms.

Sales of chips and machines were brisk, hitting their second and fourth highest monthly values at $7.1 billion and $4.3 billion, respectively.

By region, exports to the European Union reached an all-time high of $6.4 billion, while shipments to China climbed 10.2 percent on-year. The value of exports saw on-year growth in all key regions excluding the Middle East, according to the ministry. 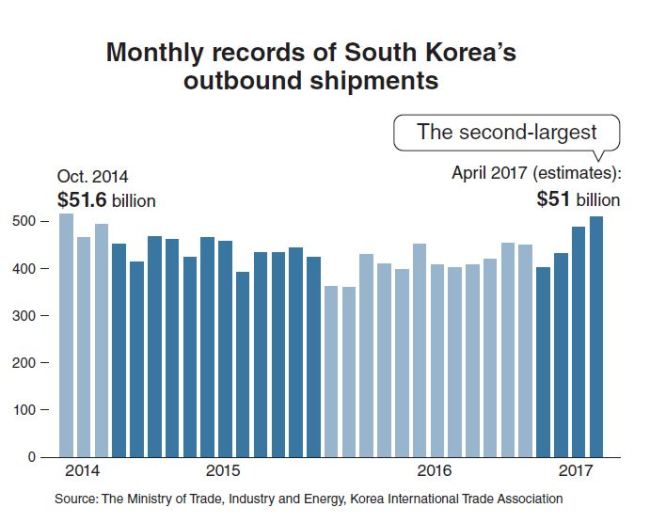 The robust readings came in line with signs of recovery at home and abroad earlier in April. The central Bank of Korea on April 13 raised the growth outlook to 2.6 percent, up 0.1 percent from the previous projection in January, marking the first time for a turnaround from the downward trend in 45 months.

The government, however, has taken a cautious stance on the boost in the economy, and vowed to tackle dependence on selected economic powerhouses.

“We do see the exports back on track,” said Trade Minister Joo Hyung-hwan in a meeting Thursday. “South Korea’s exports, however, now depend on a few select markets such as the US and China and the brisk exports are subject to policy changes of those nations.”