Consumer prices rise fastest in over four years in Jan.

The consumer price index gained 2 percent in January from a year earlier, the highest level since 2.1 percent in October 2012, according to Statistics Korea. The on-year growth of the index had stayed just above zero percent since May last year and started to increase from September in the 1 percent range, hitting 2 percent last month.

The fast gain in consumer prices was attributed to higher price hikes in agricultural products and petroleum goods, affected by egg price hikes in the wake of the nationwide outbreak of the bird flu late last year. 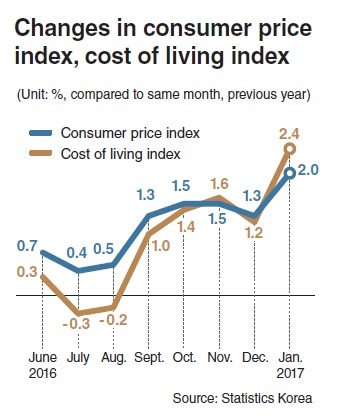 “Consumer prices in January were greatly affected by the ‘base effect’ from the low energy prices in the same period of last year,” Finance Minister Yoo Il-ho said at a meeting with economy-related ministers in Seoul.

“The consumer inflation is expected to come down to the high 1 percent range and remain there for a while.”

The government’s official data on consumer prices, however, does not seem to reflect the reality of how Korean consumers actually perceive inflation, according to a survey.

The survey of 1,030 adults by the office of National Assembly Speaker Chung Sye-kyun showed that respondents perceived the inflation rate to have been about 9 percent last year, compared to the Bank of Korea’s official data that put it at 1 percent.

The official misery index, or the addition of the jobless rate to the annual inflation rate minus the economic growth rate, stood at 2 in 2016. However, the misery perceived index, representing how people actually feel about those indicators, was almost 12 times higher at 23.7, the survey showed.

There was also a wide gap between the official job data and public sentiment.

While Statistics Korea’s jobless rate was 3.7 percent in 2016, the perceived jobless rate was 11.4 percent, the survey showed. The government data excludes those who gave up job searching after failing to land a job after an extended period.