M&A deals in 2016 halves in value due to political scandal: report 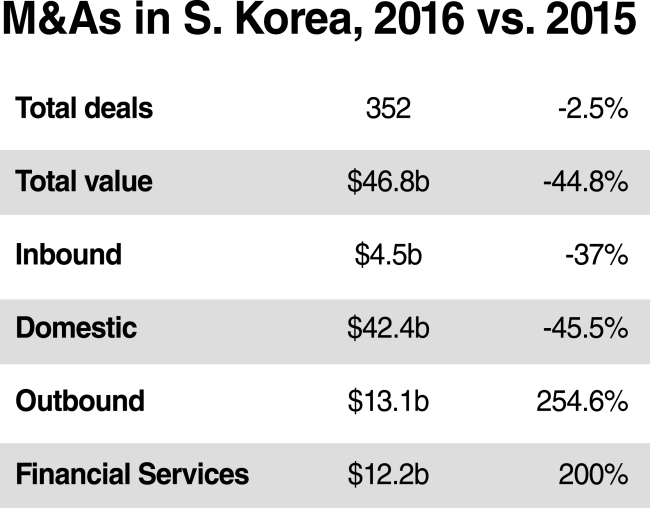 The steep decline in value was mainly due to a lack of mega deals that are more than $10 billion, according to Mergermarket.

There were only two large-scale mergers in 2016 -- SK Holdings and SK C&C, and Samsung C&T and Cheil Industries -- totaled $35.7 billion.

In the fourth quarter of 2016, the country saw two deals over $1 billion: the acquisition of a 95.22 percent stake in STX Offshore & Shipbuilding by its creditors worth $ 3.6 billion via a debt to equity swap transaction and the 29.7 percent stake purchase of Woori Bank by an investor group all based in South Korea from state-run Korea Deposit Insurance Corporation for $2.1 billion.

The influence-peddling scandal involving president Park Geun-hye slowed down domestic deals in the last quarter of 2016, it said, as nine chiefs of conglomerates, which are traditionally active players in domestic M&A deals, were occupied with parliamentary hearings.

“The recent political turmoil, combined with a shaky domestic economy and a potential rise in interest rates, could lead chaebol to avoid large deals in the coming months, until a new president is elected,” the report said.

It also cited a THAAD missile row with China may affect investment from the greater China region, which was the top foreign investor in 2015.

Due to decrease in value, South Korea’s portion in the total M&A deals in the Asia Pacific region shrank from 9 percent to 6.4 percent.

The most active sectors last year were industrials and chemicals that had 106 deals worth $11.4 billion and 25 deals on financial services worth $12.2 billion, respectively.

The industrial and chemicals sector is likely to remain active in terms of M&A this year, as asset disposals from shipbuilders such as Hyundai Heavy Industries will gain traction while Korean petrochemical companies are reportedly looking for acquisitions, it said.

Mid-sized enterprises, which are less affected by the political scandal, are expected to form investment strategies for domestic and overseas expansion separately.

There were 44 outbound M&A deals last year worth $13.1 billion, compared with a total of 47 deals worth $3.7 billion in 2015. This was primarily due to Samsung Electronics’ $ 8.6 billion takeover of Harman International Industries in November. This also became South Korea’s largest outbound deal so far.

New players could also emerge in sectors such as media, consumer, and pharma, medical & biotech this year as South Korean companies look to expand their presence domestically and abroad.