EXIM Bank to reduce total funding to W67tr in 2017

The government-owned bank will allocate 67 trillion won ($57 billion) in credit for companies this year, of which 53 trillion won will go to loans and 14 trillion won to guarantees, said Lee Duk-hoon, chairman and president of the bank. 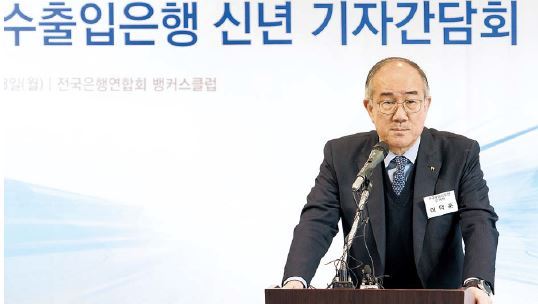 The budget is 11 percent smaller than the previous year, declining for two consecutive years. The bank said the decreased budget reflects a slow demand for loans amid sluggish exports.

Lee described the year 2016 as an “extremely tough year” and warned 2017 will not be easy.

Despite the smaller budget, the bank will increase the portion of support for new-growth engines and small and mid-sized companies in the new year, Lee said.

The bank will spend 6.5 trillion won in loan allocation for new growth engines including service, new energy and information and communication technology, up 44 percent from 2016, he said.

The bank will also spend 26 trillion won, 2 trillion won higher than last year, in lending for small and mid-sized enterprises.

Asked about restructuring in the shipping and shipbuilding industry, Lee emphasized the strategic importance of the industry.

Regarding the government’s move to designate EXIM Bank and two other banks as government enterprises, he remained evasive but said instead, “There are a lot of changes in reality, and I hope that EXIM Bank will be an organization that can accommodate those changes.”