North Korean leader Kim Jong-un is set to deliver his New Year's address at 12:30 p.m. on Sunday, Pyongyang's state media said, amid close attention to what messages he will offer to South Korea and the United States.

The North's leader plans to issue a verbal New Year's message at midday (Pyongyang Time), according to Pyongyang's state TV broadcaster, as his iron-fist rule entered its sixth year. 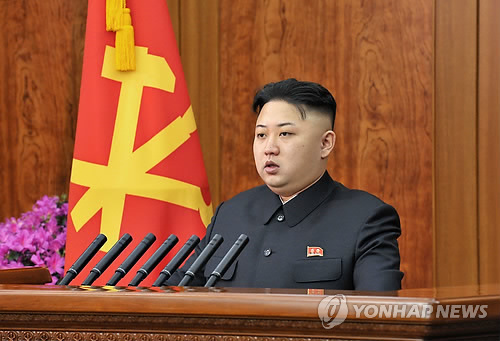 Since 2013, the young leader, who took office in late 2011, has offered a verbal New Year's message through the country's state television and radio. His late father and former leader Kim Jong-il delivered his messages in joint editorials carried by media outlets every year.

In his 2016 New Year's address, the North's current leader vowed efforts to improve ties with Seoul, saying he is open to candid talks with the South. It also did not include any comment on the country's dual pursuit of nuclear and economic development.

But only a few days later, North Korea conducted its fourth nuclear test following those in 2006, 2009 and 2013. In September, it also carried out another nuclear test.

Experts said that Kim's messages toward Seoul and Washington will be closely monitored to gauge how Pyongyang hopes to set its ties with the two nations, which are undergoing political changes.

South Korea is widely expected to hold a presidential election earlier than expected this year, as parliament approved a motion in December to impeach President Park Geun-hye over a corruption scandal.

Thae Yong-ho, a high-profile North Korean defector, said last week that the North's leader is determined to complete the development of nuclear weapons by the end of 2017.

For Pyongyang, the year 2017 is "an opportune time" as it believes that Seoul and Washington will not be able to take physical or military actions to deter its nuclear aspirations due to their internal political situation, said Thae, a former top North Korean diplomat who defected to the South last July.

The North will likely seek dialogue after it secures the status of a nuclear state, an idea rejected by Seoul and Washington, he added.

Analysts also said that North Korea will make this year the pinnacle of the personality cult for its leader to boost its internal solidarity.

The country may make more powerful provocations around its key anniversaries, including Kim's birthday, which falls on Jan. 8, they said.

Last year, Kim reaffirmed his one-man leadership by holding two key events that analysts say served as his coronation -- a rare congress by the ruling Workers' Party of Korea in May and a parliamentary meeting in June.

"But when it comes to North Korea's message to South Korea and the outside world, its New Year's speech is used as a means for its propaganda campaign."  (Yonhap)