The impact from sluggish exports, the Galaxy Note 7 recall, Hyundai Motor strike and Hanjin Shipping bankruptcy were felt on the indexes of industrial output and consumption in September, according to data released by Statistics Korea. 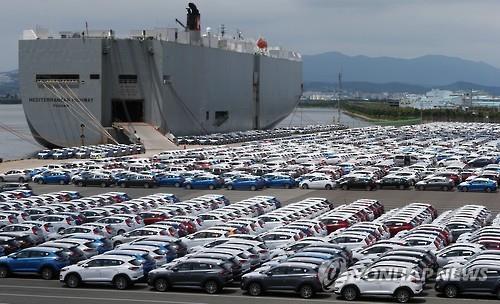 The index of all industry production in September decreased by 0.8 percent from the previous month, falling for the first time since June.

The consumption index plummeted 4.5 percent, the biggest drop in 67 months.

The nation’s sluggish economic growth -- a mere 0.7 percent in the third quarter -- appeared to be taking a toll on consumption, with South Koreans spending less in all categories including nondurable goods such as food and beverage and durable goods such as electronics and cars.

According to the Ministry of Strategy and Finance and Statistics Korea, the monthly decrease in retail sales was mainly due to reasons such as the base effect and recalls of the Galaxy Note 7.

For instance in August, there was an exceptional increase in electronics consumption amid the record-breaking heatwave. People bought less agricultural goods, as the heatwave affected production and pushed up prices of vegetables and fruits, the official explained.

Without such factors, the decrease would be 2.1 percent, according to Statistics Korea.

The industry production index was dragged down by the fall in the service and construction industries.

It was the first decline since June when the industry production index logged a 0.7 percent increase. The index remained flat in July and August before turning negative in September.

The index for the mining and manufacturing industries inched up by 0.3 percent in September from the previous month, as the impact from automobile industry strikes, which had peaked in August, was waning in September. But the reduced production in automobiles and telecommunication equipment still weighed down on the yearly figure, which was a 2.0 percent decline on-year.

The equipment investment index and value of construction completed, which show the country’s investment trend, decreased by 2.1 percent and 4.7 percent, respectively, from the previous month.