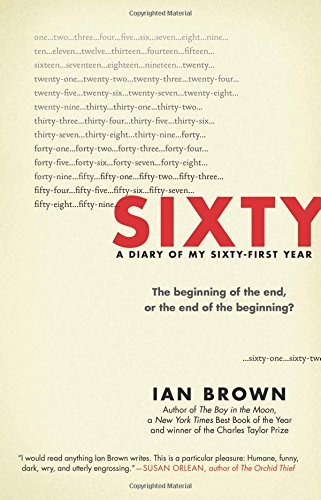 “Sixty: A Diary of My Sixty-First Year: The Beginning of the End, or the End of the Beginning?”

As a cranky wit and a wondrous observer, Ian Brown has a compelling take on the joys and agonies of growing older. His pleasures are your pleasures, and his fears will feel as familiar as old friends.

Does Brown relish having turned 60? Hardly. He seems a little stunned by it — ambushed and wounded. It’s as if the thought of turning 60 caught up with him in some dark alley of the mind.

But his insights, quips and candid assessments of aging are to be enjoyed by any boomer nearing or having passed the big 6-0.

This yearlong diary, which begins on his 60th birthday, is a heaping batch of bittersweet. To be sure, Brown wears his melancholy on his sleeve. Like a pro athlete just retired, he seems pretty convinced that most of life’s good times are behind him.

Indeed, many of his big goals — fiery romance, fortune, recognition — are mostly passed. He admits to being fortunate in two of the three; one of his running laments is a lack of cash reserves.

Where Brown really reels you in is with his sincerity. He is refreshingly candid about his growing physical limitations even as he moves about the world, visiting family and friends, fishing, swimming and staying active daily.

The Toronto-based newspaper writer follows a routine that many Califor-nians will relate to, minus our trademark sunny dispositions.

“Getting older is a process of getting lonelier and lonelier until, at the very end, you are completely solitary, and then you are officially dead,” he writes.

Likewise, there is very little chirpy, New Age navel-gazing to his writing. His mind is keen and active, and his pages are full of fine references to poets and artists who he knows also dealt with the minefield of late middle age.

He speaks of his existential crises:

“The real question is, what does it mean to live to full effect? How do you know if you are fulfilling your time, or wasting it?”

He speaks of his love life:

“I haven’t had sex for a month. A month! I remember the days of being fifty-seven, when going a week was too much. But now I can stand it for a month. I am not sure this is good news.”

He speaks of physical changes:

“Age spots show up on my body with such frequency I feel like a special effect — the man who is turning sepia before his photograph can.”

Brown acknowledges that growing older is an issue that everyone talks about, “and a lot of it sounds alike.”

Not this book. There is an inertia to the writing and an occasional poetic lilt.

He is honest about his struggles with marriage, his love for his wife and brother, his difficulties with an outspoken and challenging mother.

Through all of it, Brown peppers his memoir with crisp, self-deprecating, asides and a wry point of view that holds up to the very end.