By Park Ga-young
Published : Sept 30, 2016 - 16:05       Updated : Apr 22, 2020 - 12:52
South Korea’s industrial output in August shrank for the first time in four months, dragged down by a double-digit drop in production of automobiles due mainly to an ongoing labor strike, government data showed Friday. 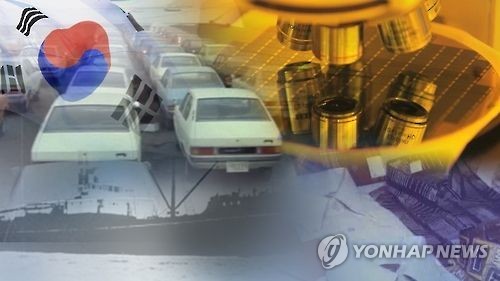 Drawn-out labor strife at Hyundai Motor, the nation’s biggest carmaker, and other carmakers is estimated to have reduced monthly output by 65,700 units for August.

This has exacerbated the decline in auto output caused by sluggish exports, according to an official from Statistics Korea, which predicted an 8 percent fall without the strikes.

The sharp declines in the auto and semiconductor sectors weighed down the total output in the mining, manufacturing, gas and electricity industries, which retreated 2.4 percent from the previous month. A 2.4 percent drop is the biggest monthly drop since January 2015, which saw a 3.5 percent decline.

Across all industries, the index inched down by 0.1 percent from the previous month but grew 5 percent year-on-year, backed by growth in the services and construction sectors.

In August, the services and construction sectors edged up by 0.7 percent and 3.2 percent, respectively, from the previous month.

Services output grew mainly due to an expansion in retail sales, finance and insurance as well as health and public services.

The estimated capacity utilization rate, which shows the economy’s current output as a proportion of its maximum potential, was the lowest in more than seven years in August. It stood at 87.4 percent in August compared with 91.6 percent in July, according to Statistics Korea.

Unionized workers of Hyundai Motor are on their first full scale strike in 12 years since Monday.

Other carmakers, namely Kia Motor Co. and GM Korea Co., have also suffered production losses due to the annual wage negotiations with their labor forces in July and August.

“Resolution of work-place tensions at auto manufacturers will inevitably drive an improvement in overall production, although strikes are yet to be resolved, the chances are that weak auto output will also weigh on September and, potentially, October industrial output,” Mark Walton, an economist at BNP Paribas wrote in a note on Friday.

Meanwhile, the retail sales index in August increased by 2 percent from the previous month and 6 percent from the same period in 2015, data showed. Analysts say the record breaking heat wave during the summer drove up purchases of electronic goods.