By Park Ga-young
Published : Sept 25, 2016 - 16:14       Updated : Apr 22, 2020 - 12:52
The number of Chinese tourists who visited South Korea in August decreased from the previous month, apparently due to political tension between the two countries over the deployment of a missile defense system here, data showed Thursday.

The number of visitors from China stood at 873,771 in August, down from 917,519 in July, according to the report from the state-run Korea Tourism Organization. 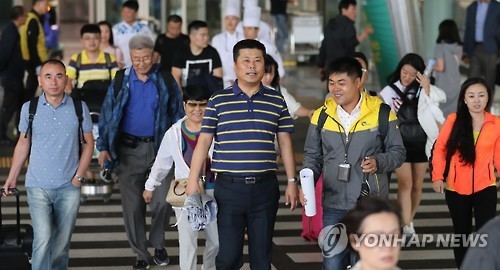 But it was also 70.2 percent higher than the same period in 2015, which saw a dramatic decrease in tourists due to the outbreak of the Middle East respiratory syndrome here. July and August are usually the busiest months of the year for the tourism industry.

Since the South Korean government unveiled a plan to deploy the Terminal High Altitude Area Defense system here in July, observers have raised concerns over possible economic retaliation by the Chinese government against the plan.

“I did not see much difference in August but this month there was about 20 percent less (customers and consultation),” a Shanghai-based tour guide, surnamed Wang, who specializes in South Korean tours, told The Korea Herald on Thursday. “We assume that it’s because of the THAAD as Chinese people could be easily swayed by the Chinese government’s position and propaganda.”

“But I think it’s temporary and it will recover during the weeklong National Holiday (that begins Oct. 1) since there are still many people wanting to go to South Korea,” Wang said.

The total number of foreigners who visited Korea in August was around 1.64 million, lower than the 1.68 million in July.

Meanwhile, the Korean Duty Free Association said Thursday that a total of 1.9 million foreign nationals visited duty-free stores in August, with total sales reaching $68.24 billion. There were 16,800 fewer visitors to such stores in the month, but sales were up 7 percent from $63.75 billion in July, which could be an indicator that customers are spending more.

“The decrease in visitors might be because July saw a record high in terms of both visitors and sales” a KDFA employee told The Korea Herald. “So it might be an exceptional month. We need to see whether there is a trend and this will become more apparent next month.”