Lee Jay-hyun was indicted in 2013 on charges of embezzlement and tax evasion and was given two and a half years in jail last year, along with a fine of 25.2 billion won ($22.8 million). 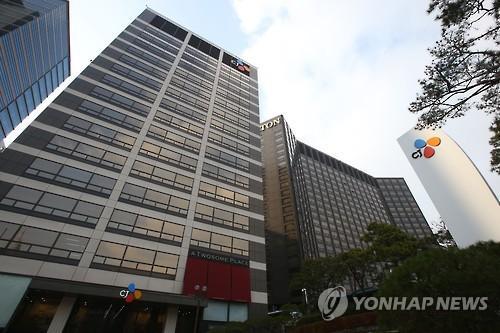 His confinement has been suspended a number of times because the 56-year-old suffers from Charcot-Marie-Tooth disease, which involves hereditary motor and sensory neuropathies, chronic renal failure and other related complications.

The business tycoon was set free on Friday on presidential pardon along with 4,870 people, three days ahead of Liberation Day as part of celebrations to mark the 71st anniversary of Korea's independence from Japan's 1910-45 colonial rule.

Following his release, CJ said there will be no major change in the leadership for now, while expressing hope for normalizing management.

"Lee will be hospitalized for a while for treatment, and there will be no drastic change in the management," a senior CJ official said. "(His release) will provide momentum to revitalize investment and employment that have stagnated over the past three years."

CJ has been grappling with slow growth due to years of leadership vacuum. Its sales growth has slowed to single digits over the past three years, with consolidated sales standing at 29.1 trillion won in 2015.

CJ aims to log 100 trillion won in sales by 2020, targeting 70 percent of revenue from the overseas market.

To achieve the goal, the conglomerate has been eyeing merger and acquisition opportunities abroad in such areas as food, bio, entertainment and logistics.

In June, CJ Group said it had joined the race to buy the Korean unit of U.S. fast food chain McDonald's to diversify its food franchise business.

CJ Cheiljedang Corp., the nation's leading food company, is setting its sights on companies that develop food additives, seed plants and other items from microorganisms and plants.

CJ CGV Co., its cinema chain affiliate, is also seeking to expand its presence in China and other Asian countries on the back of the popularity of Korean pop culture and movies. It lost out two bids to enter the Indian market last year. (Yonhap)