Despite the progress, WWF says the world has still a long way to go to save endangered animal

After years of concerted efforts by the international community, the number of wild tigers has increased to 3,890 last year from the 2010 estimate of 3,200, World Wildlife Fund said Monday.

The figure compiled by International Union for Conservation of Nature can be attributed to multiple factors including an increase in tiger population in India, Russia, Nepal and Bhutan, and enhanced protection of the endangered animal in countries.

“For the first time after decades of constant decline, tiger numbers are on the rise,” said Marco Lambertini, director general of WWF International.

“This offers us great hope and shows that we can save the species and their habitats when government, local communities and conservationists work together,” he said.

WWF released the data ahead of a major tiger conservation meeting that kicks off this week in India.

The three-day Asia Ministerial Conference on Tiger Conservation brings governments together to report their progress on the Tx2 goal. Tiger-range countries agreed to double wild tiger numbers by 2022 at the 2010 Tiger Summit in Russia.

However, the environment advocacy group said the world has “still a long way to go” to reach the goal, calling for a strong action plan for the next six years.

“The global decline has been halted but there is still no safe place for tigers,” said Michael Baltzer, leader of WWF Tx2 Tiger Initiatives.

“Southeast Asia, in particular, is at imminent risk of losing its tigers if these governments do not take action immediately,” he said.

Tigers have been on the verge of extinction due to poaching and habitat loss. 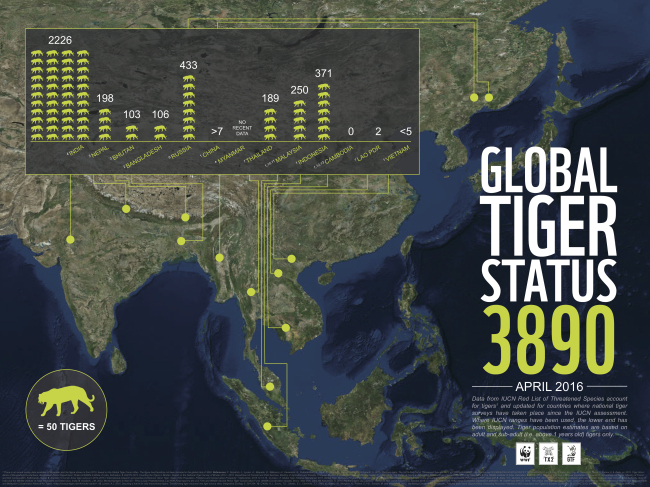 According to TRAFFIC, a wildlife trade-monitoring network, a minimum of 1,590 tigers were seized by law enforcement officials between January 2000 and April 2014 for a multibillion dollar illegal wildlife trade.

WWF urged tiger-range governments to release the number of the wild animal population, saying that they should know the threats they face first.

However, some countries, including Myanmar and China, didn’t publish the latest data, it added.