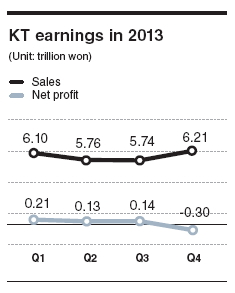 KT, the nation’s second-largest telecom operator, on Tuesday reported a deficit in its quarterly operating profit for the first time in four years, mostly on account of its sluggish performance in its communications business, combined with its big spending on handset subsidies.

The company’s fourth quarter operating loss stood at 149.4 billion won ($138 million), with a net loss of 300 billion won during the October-December period.

For all of 2013, the mobile carrier reported 23.8 trillion won in sales, which reflected a 0.2 percent decline. Operating profit for the year was at 874 billion won, down by 27.7 percent from the previous year.

Due to the decline in the number of landline subscribers, KT’s wired business posted lower sales of 5.9 trillion won, reflecting a 6.7 percent decline from the previous year.

“KT spent a good deal of money on handset subsidies, which will continue this year too as the competition to attract subscribers amid a saturated market becomes fiercer,” said Kang Bong-woo, an analyst at LIG Investment & Securities.

Some analysts including Song Jae-kyung of KTB Investment & Securities Co. attributed the decline to the so-called “Big Bath” effect, which indicates an accounting technique that basically involves reducing assets during a certain fiscal time period to eventually lower future expenses.

The technique had been undertaken in order to clear the papers for the new chief executive CEO Hwang Chang-gyu.

Hwang on Tuesday held a meeting with the newly assigned managers of KT, saying that “KT has seen severe damage to its competitiveness in the communications business and experienced a lack of tangible outcome in its non-communications sectors as well.”

He emphasized that he would put his “utmost efforts” into normalizing the business to revitalize the company.”

As part of the commitment, the members agreed to slash a combined amount of about 20 billion won from their salaries.