Originally, Dokdo’s main East and West islets were not divided like they are today. Throughout time, the volcanic outcrops have been eroded and weathered by the wind and the waves.

Dokdo is unique because its evolution is still on display. Natural activity makes it difficult for many such oceanic mountains to retain their original shapes. The Environment Ministry designated Dokdo one of the nation’s first geological parks in December 2012, along with Ulleungdo and Jeju Island.

“The composition of the igneous rocks of Dokdo and Ulleungdo are similar to each other but differ from those of Japanese volcanoes in many regards,” said Hwang Jae-ha, a senior researcher at the Korea Institute of Geoscience and Mineral Resources.

The islets are also believed to lie in large deposits of natural gas hydrates, which chiefly consist of methane. The ice-like substance is found in environments with high pressure and low temperatures, such as near continental fault lines, where the gas crystallizes upon contact with cold seawater.

After 20 years of exploration, the state-run Korea National Oil Corp. detected the first commercially feasible natural gas layer off the coast of Ulsan in 1998. Production began in 2004 and two more deposits have since been discovered in the vicinity.

Dokdo is also home to at least 107 species of resident and migratory birds, including the streaked shearwater, storm petrel and black-tailed gull, according to a 2007-10 survey by the Environment Ministry. Many of these are endangered species or found only in Northeast Asia.

The islets were also the sole habitat for various plants and the now-extinct gangchi, a species of sea lion.

“Dokdo’s underwater vegetation is somewhat similar to that of the South Sea, Jeju Island, tropical regions in the Northern Hemisphere and even the Mediterranean, but very unique in that it can be classified as a separate ecosystem,” Kim In-kyu, a botany professor at Seoul National University, said in a 1981 study. 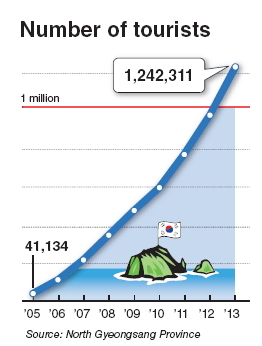 While the distinct beauty and national value of the islets entices visitors, the government is faced with the dilemma of protecting the environment while promoting tourism at the same time.

Since Dokdo was opened to the public in 2005, the number of tourists has risen gradually, hitting a record 222,000 between January a last year. That is up about 30 percent from the same period a year ago, and more than the 205,000 or so registered throughout 2012, according to North Gyeongsang Province.

To cater to the growing throngs of travelers, the then Ministry of Land, Transport and Maritime Affairs unveiled plans in late 2011 to spend 400 billion won ($378.8 million) to build new facilities on the islets by 2016. The package included a 210-meter-long breakwater, an underwater park and viewing chamber, and a 200-meter road linking the East and West islets.

The plan would bolster the country’s control over and facilitate access to the islets, the ministry said, as the current wharf can accommodate only a few vessels of about 300 tons and is difficult to dock at during high seas.

But the project has made little headway due to differences with other agencies. The Cultural Heritage Administration and Environment Ministry put priority on preservation, while the Foreign Ministry expressed concerns about diplomatic friction.

“A showy development plan might be a waste of taxpayers’ money and could also incite an unnecessary diplomatic brawl,” said Yuji Hosaka, president of Sejong University’s Dokdo Research Institute in Seoul, calling on the government to focus on studying historical records and nurturing specialists on the issue.