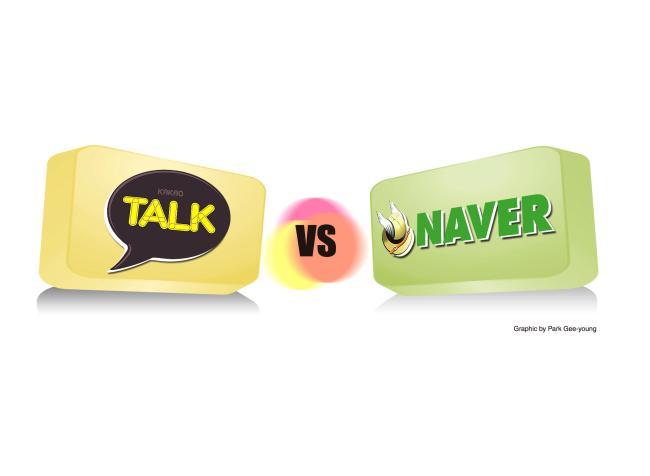 NHN, Kakao set for round two


NHN and Kakao are in full preparation mode to face off against each other, this time in content.

The fight was ignited when Kakao began attracting a large user base with its mobile messenger service Kakao Talk.

NHN, the operator of the country’s top portal Naver, has since then rolled out its own mobile messenger service called Line, attempting to outperform its rival.

Although it has had no luck accomplishing that goal in Korea, Line’s global performance has been good, becoming the top mobile messenger service in Japan. Boosted by such outcome, it has now outnumbered Kakao Talk in the total number of users.

This time, however, the war between the two doesn’t involve their mobile messenger services, but their digital content platforms.

To grab a better position in the new market, Kakao has recruited key executives of NHN. Those executives are now on the front line of design and content-related projects for Kakao.

Despite such moves, NHN was first to announce the launch of a Web-based service for novels on Tuesday.

Similar to its popular Web-based cartoon service dubbed “Webtoons,” the novelists will post their fiction on a regular basis.

“The Web novels will be updated on the specified date and time, like the broadcast programs which are aired based on a programming chart,” said Kim Jun-koo, team leader of the comic service team at NHN. “This indicates that people won’t have to miss the release of their favorite fiction.”

Currently, 15 different novels are available on Naver. They are offered for free, but the service will start pay-to-view services after the third installment of each novel.

The writers will decide how much each story will cost and they will take home 70 percent of the profit, leaving NHN with 30 percent, according to company officials.

Not only text, but illustrations will also be inserted into the Web novels to grab readers’ attention, they said.

“We have both expectations and concerns proceeding with this project,” said NHN vice president Han Seong-sook, who oversees the service. “But we’ve seen how content creators establish a new market and take on their work through our ‘Webtoon’ service so we’re considering the expansion of our territories.”

NHN is possibly looking forward to building a platform, especially for wireless devices, for a greater variety of digital content such as music, videos and games to name a few. As a start, it has secured 17 million daily “Webtoon” viewers and nearly 100 million users of its mobile messenger Line.

The move shows that it will be inevitable for NHN to stage a head-to-head battle with Kakao in the mobile arena.

Kakao, a venture firm with a 70-million-strong user base for its mobile messenger service, is getting ready to launch a digital content service platform named Kakao Page by March of this year.

“We’re not only providing text-based services, but also distributing digital content like music files as well as music videos, meaning the scope itself is different (from NHN’s Web novel),” Kakao’s chief Lee Sir-goo told The Korea Herald. “We’re planning the launch at the earliest date.”

Since announcing the debut of the new platform in a press conference last November, it has organized around 100 meetings with content producers, according to Lee.

It is expected to be uploaded through Kakao Talk, and social features ― such as being able to check their friends’ recommendations ― will be implemented so that content can be shared virally, he said. Content will cost about 500 won each to view.

“The issue now seems to be about who is ultimately successful in stabilizing the pay-to-view model for digital content in the marketplace,” said an industry insider. “That will show who has retained the upper hand in the mobile content industry.”